On the 20th AUG 1917, Lt. P.G. Taylor Shot down an enemy 2-seater aircraft. The experience forever changed his mind about war in the air. 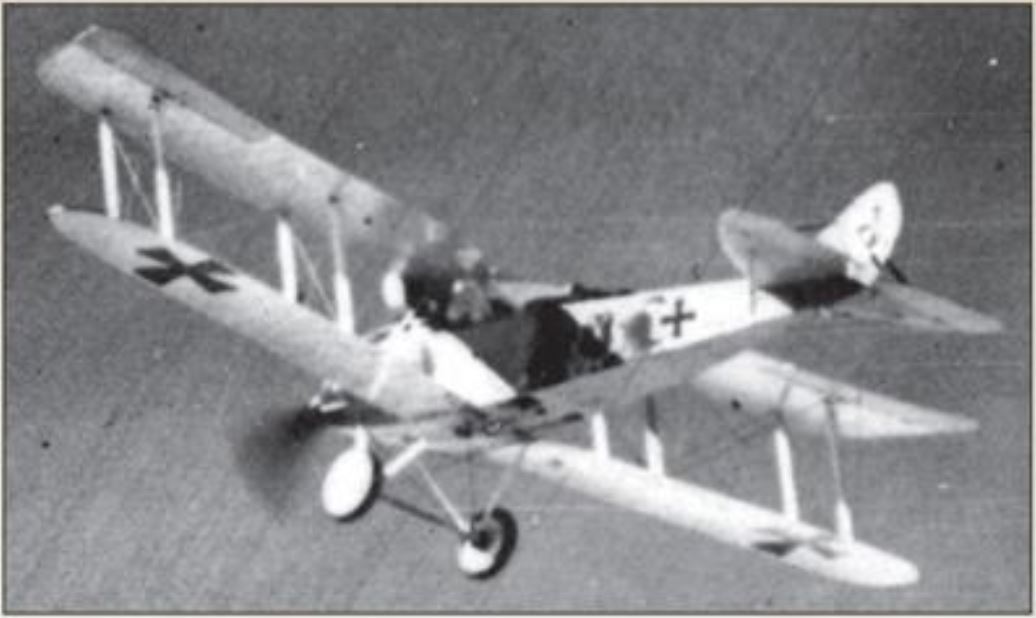 P.G. Taylor on a regular aerial patrol sighted the dull camouflage wing surfaces of 2 Rumplers. They hadn’t noticed him or the British scouts of 66 Sqn. Bill Taylor and his flight closed in for the kill: 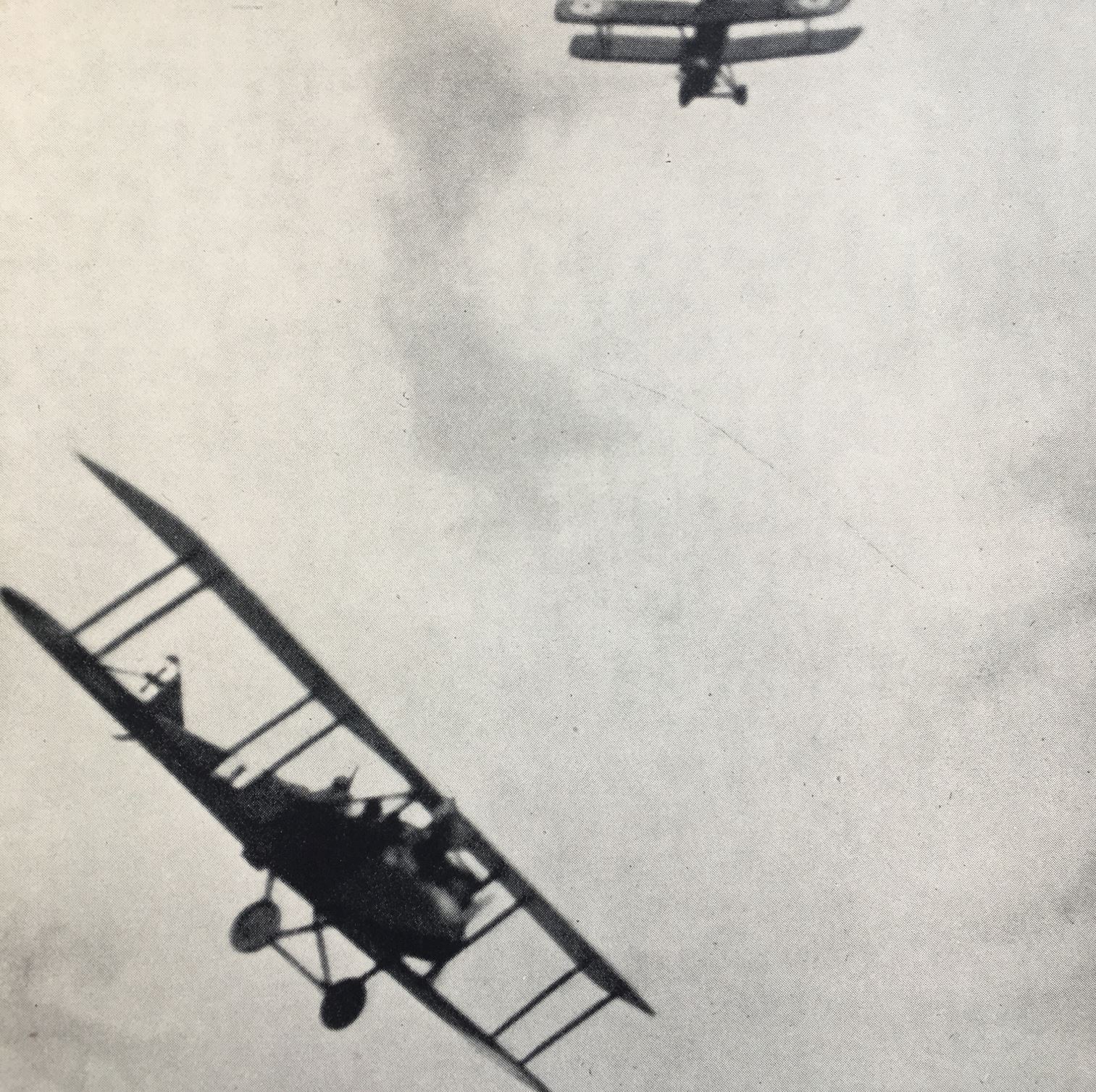 I was shaking with the excitement of the chase. Everything had concentrated on this moment. All the uncertainty as we stalked these Huns vanished as I came in for the first Rumpler. Tracers came smoking close by my machine and as I opened fire I could see the rear gunner crouching at me while the Rumpler held a steady course. 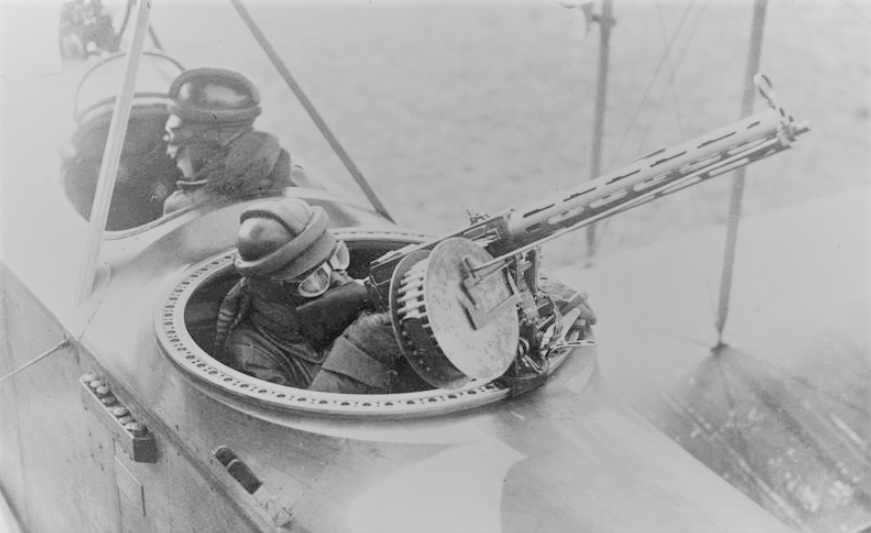 They had guts.
The black crossed aeroplane rushed in towards me and swept through below…Other members of the flight came through to the attack and chased him into the east. 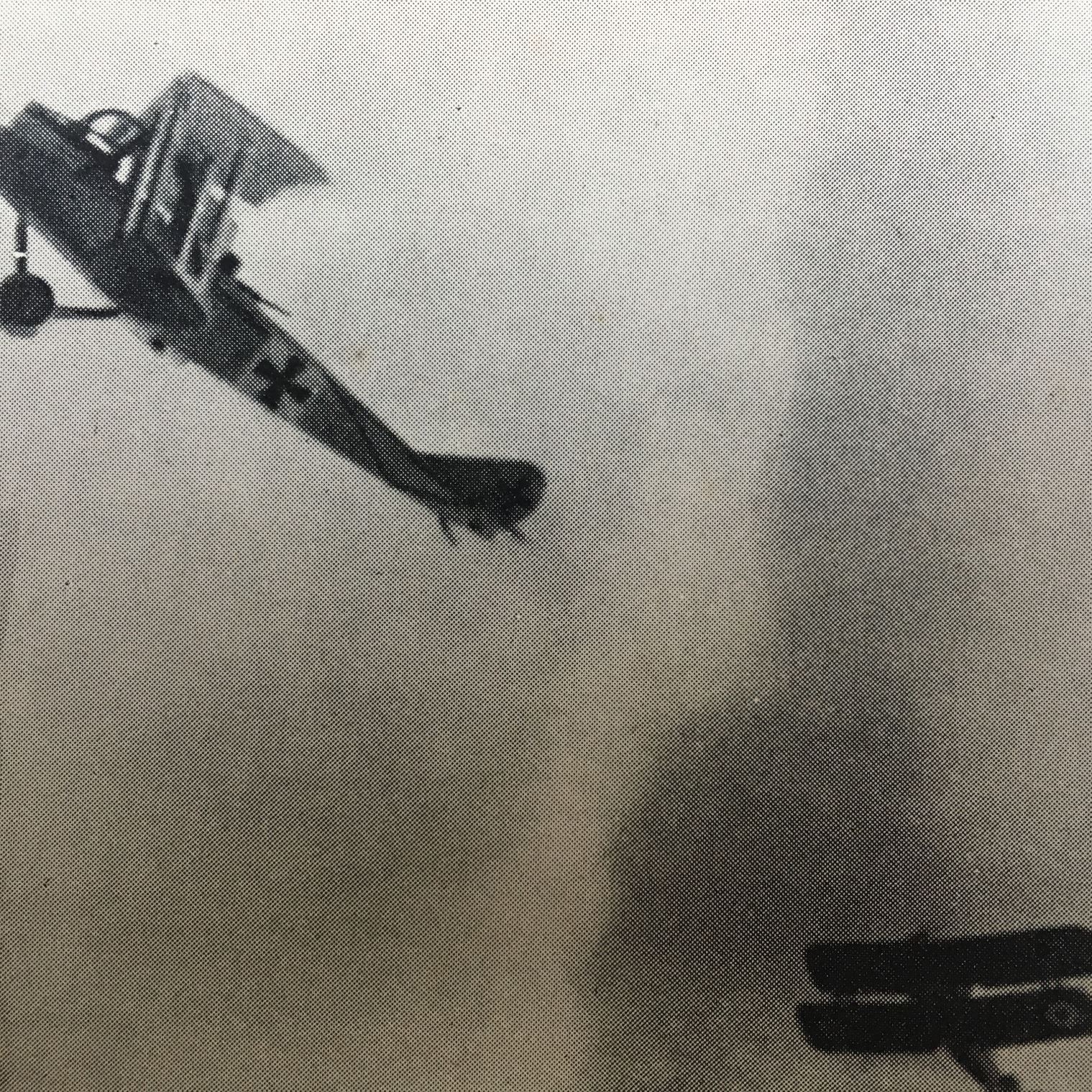 The first Rumpler escaped. The second, however…

… was still coming … I put the nose down steeply, went on through his level, and with the speed of the dive pulled up almost vertically from below. As his blue-white belly came forward to the sights I followed him through with the Vickers pumping out its rounds… 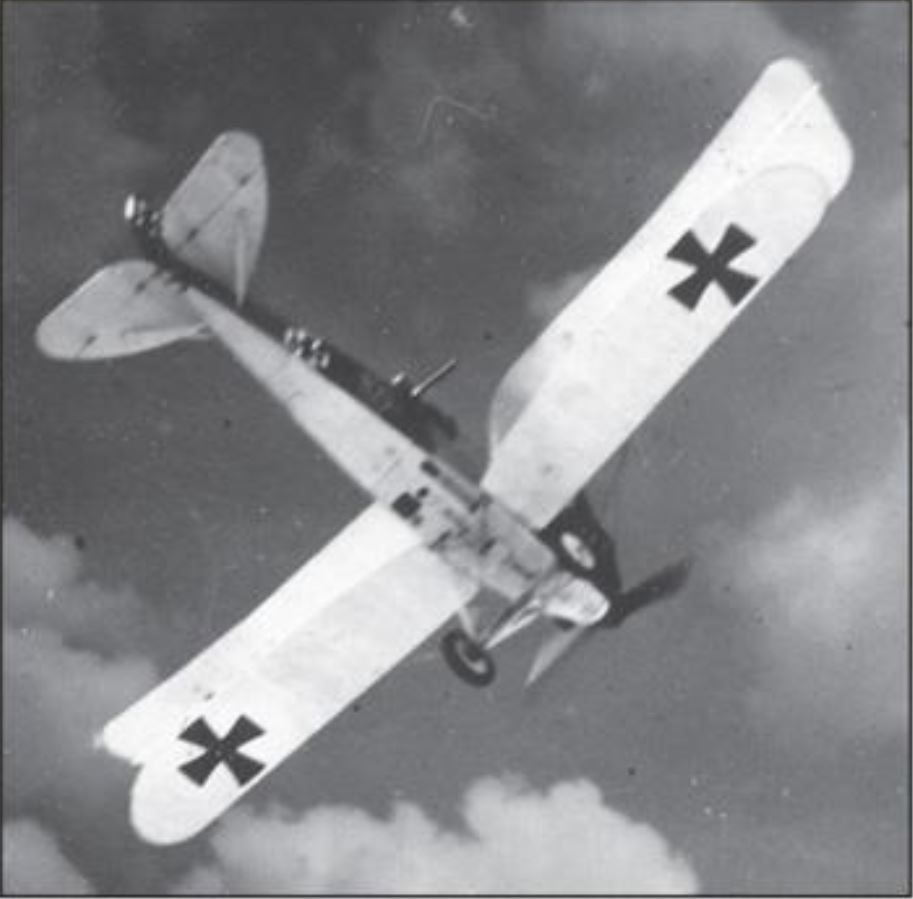 bq…against the clear blue sky.. a red glow like the end of a cigarette shone out of his fuselage. I watched, fascinated not yet believing he was on fire. Then the black smoke came, trailing like a funereal streamer from the stricken aircraft; staining the blue of the sky.

The burning aircraft continued on, straight and level: 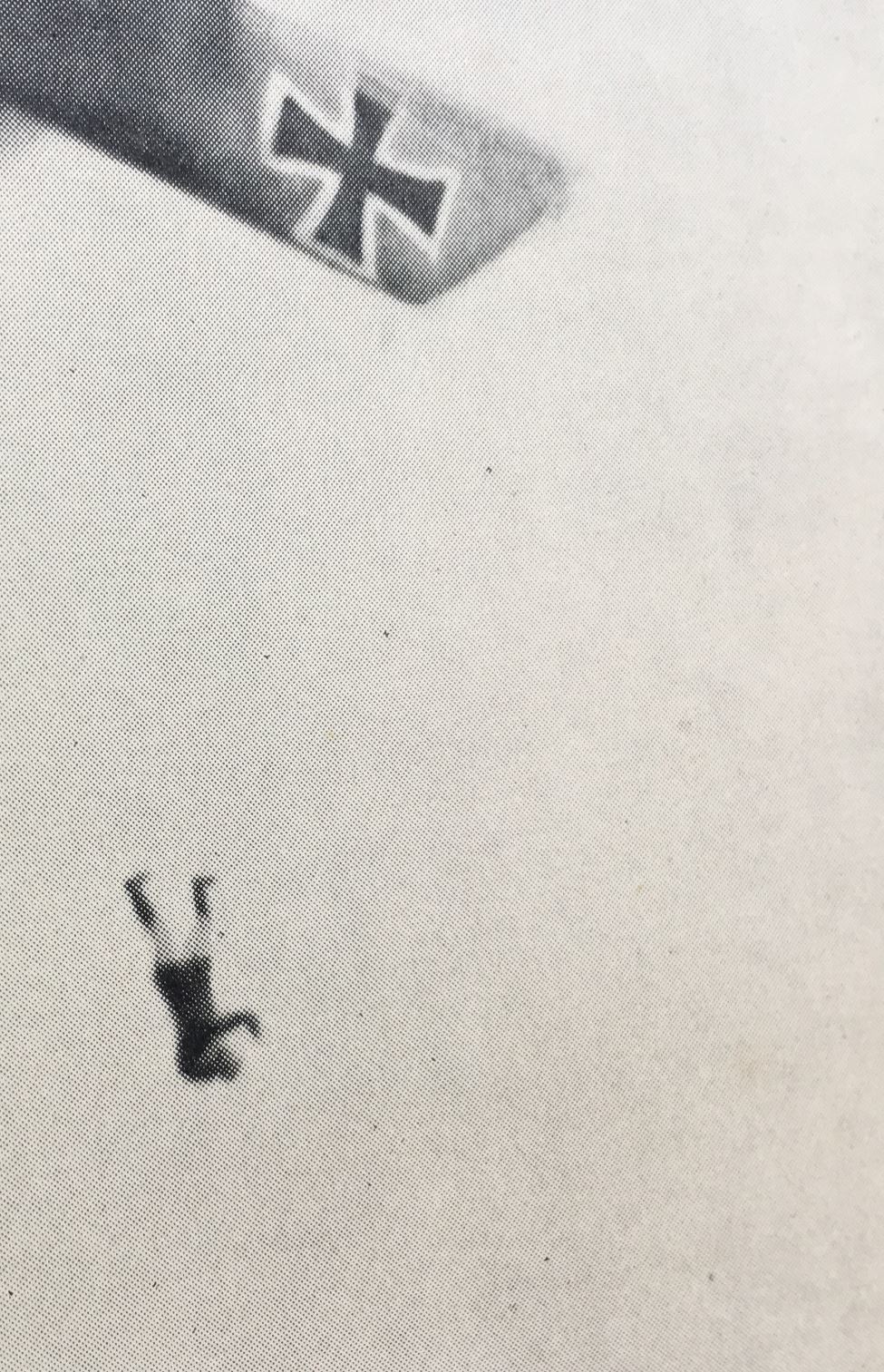 From my wild triumph at this successful end to a long chase, a dull sense of horror came over me. There was something awful about this doomed aeroplane.

Then a black object detached itself from the blazing Rumpler; a grotesque thing with loose and waving ends. The rear gunner had jumped from death by fire to which my action had condemned him. He appeared to fall quite slowly, passing my machine as though he were almost floating in space; and then he was gone, invisible against the dark earth.

The drama above me continued. The Rumpler now just a stream of stinking black smoke, slowly put its nose down as pieces came off in flame and smoke. Then the fire seemed to go out, but it burst again into flames and finally hit the ground with a great explosion, leaving a cloud of smoke drifting slowly over the land.

Taylor with his home-made anti-frostbite leather mask. The Pup his downed the Rumpler IV in was B1757 not &#)( which had been replaced

…this was no triumph…The horrible wavy thing in the air had a home, parents, someone who loved him. Now he was dead lying crumpled on the earth, killed by me.

For the first time, I was horror-stricken by the result of war in the air… somehow before it had all remained impersonal. Not an aeroplane with a man in it, but a dangerous creature of the air to be destroyed. For some reason, this Rumpler was different, or perhaps I had been in France too long.

There was, however, some excitement back at 66 Sqn. The wreckage of the doomed Rumpler had been found:

As far as I can remember, this was the first Hun we had got on our side of the lines. So a Crossley tender was organised to go up into the crash.

I was still sick with the whole thing, but, somewhat inconsistently, I went with the others in the tender; mainly to avoid the embarrassment of explanations. 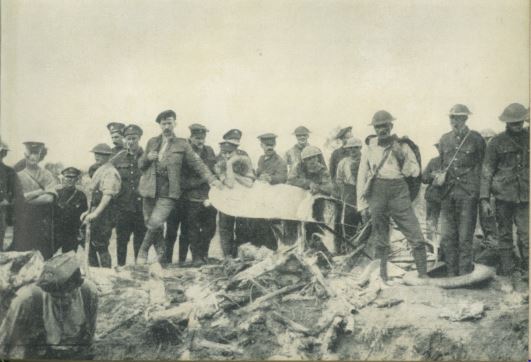 Wreckage of the German Rumpler shot down by the author over Briclen on August 20, 1917. Source: ‘The Sky Beyond’ Sir Gordon Taylor, 1963.

The big Mercedes engine had dug a hole in the soft earth. The rest was unidentifiable wreckage. A few tin-hatted soldiers were standing around. One of them came over to me and said, ‘Want to see the bloke? He’s under the sack.’

The thing under the sack had been a German pilot. I turned away.

Lt. Taylor had no more taste for war.:

I began to think my way over the world, to my home in Australia; to Lion Island with my boat moored on the beach; the tent by the Banksia trees, the red gums sprawling over the sun-bleached sandstone rocks, the call of the little penguins coming in from the sea at night… 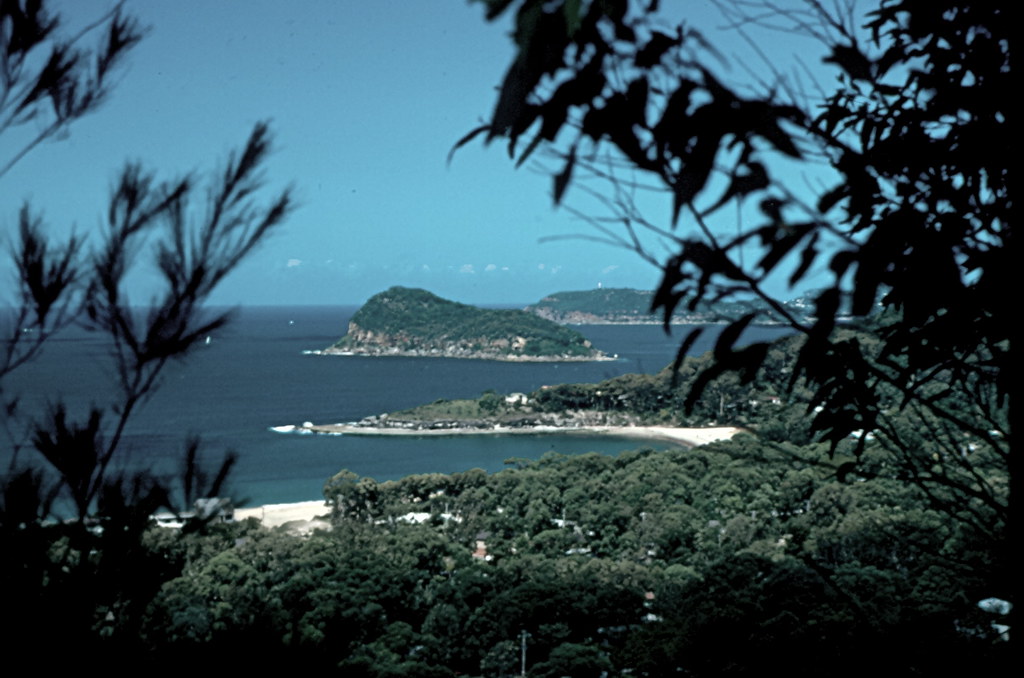 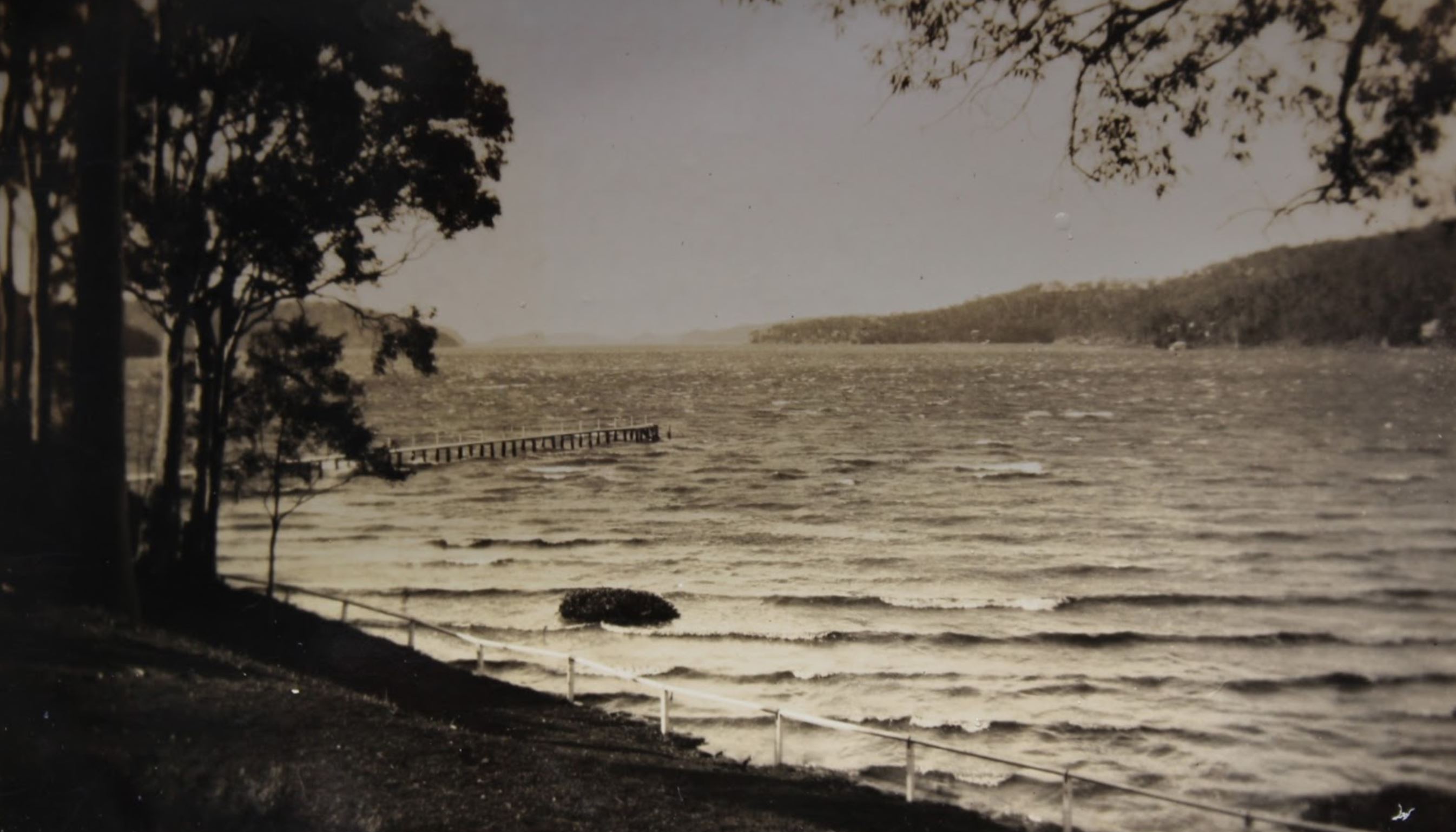 Top: Lion Island, Pittwater. Below: Family photo for Taylor’s estate. Photo by Don Taylor, son of Bills, eldest brother. In his words ‘Where they built the house there was an L shaped verandah and you could see right down to Lion Island and across Pittwater. You couldn’t see Church Point, that is tucked over the hill, but it was a spectacular view just the same.’ Source: Pittwater online news.

Bill had come full circle. He was inspired by the thrill & romance of aerial combat whilst reading an article en route to Liverpool training camp. Witnessing the German pilot’s grizzly death caused Bill to question the war and confirm his true beliefs. Aeroplanes were ‘God-given’ things. Their true purpose was to inspire pioneering feats. Bring people together. Not maim and kill.