Sydney's mast not destined for 'Sow and Pigs' 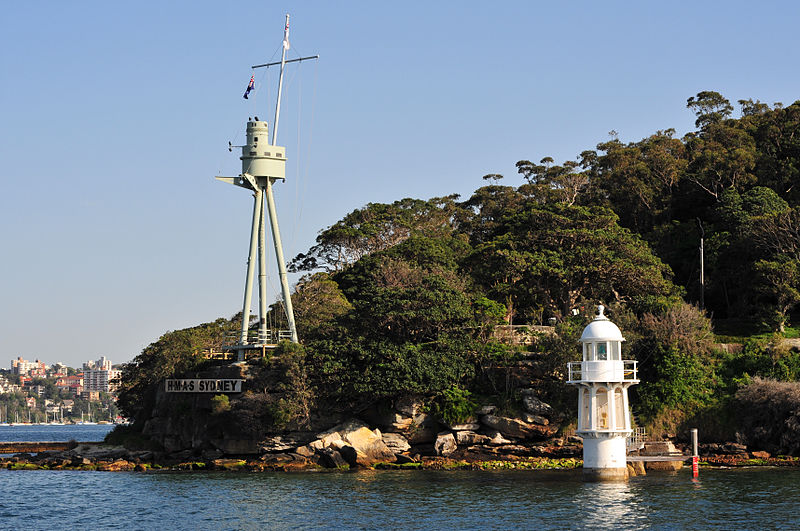 Original plans for the seating and positioning of guests, dignitaries and members of the public for the HMAS Sydney Memorial Mast ceremony at Bradley’s Head have been rediscovered and photographed in high resolution and are now available online. 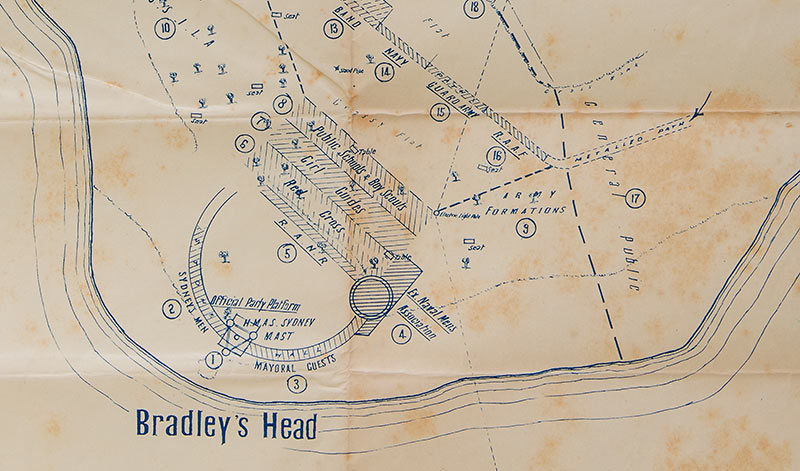 The plans are dated 1st of November 1934 – 3 weeks prior to the major harbourside event on 24 November 1934 that commemorated the sinking of the SMS Emden by the HMAS Sydney. The Daily – on its front page and inside page – reported on ‘Mosman’s Fine Ceremony,’ ‘Details of Procedure’ and ‘Time Table’ of events including maritime arrangements on the day. 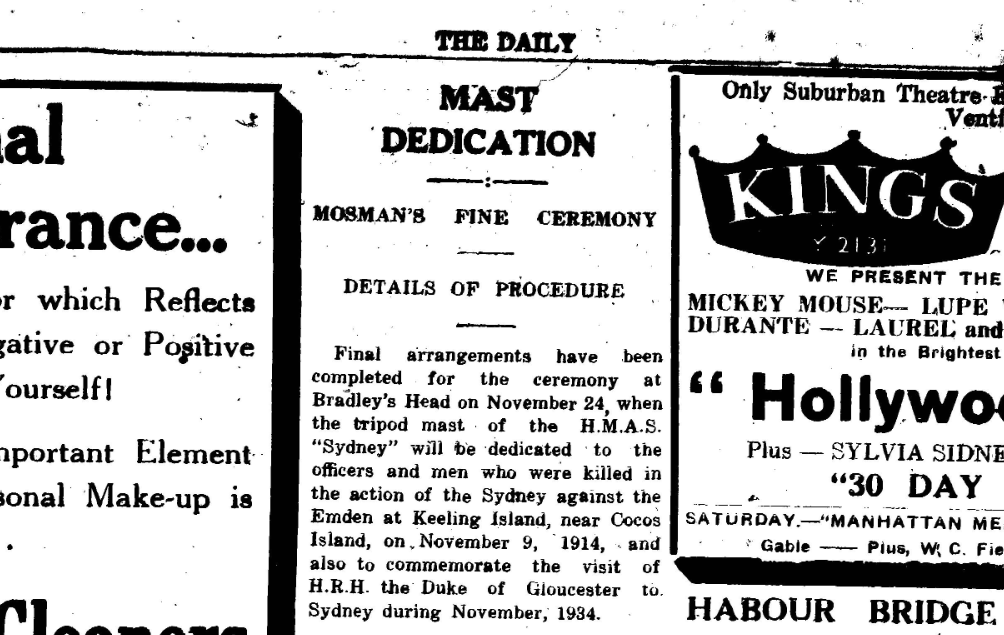 In the words of fellow historian Gavin Souter –

Mosman’s mayor at the time Jack Carroll was a diligent local historian, and with his enthusiastic support another 27 tons of history was added to the municipal coastline. 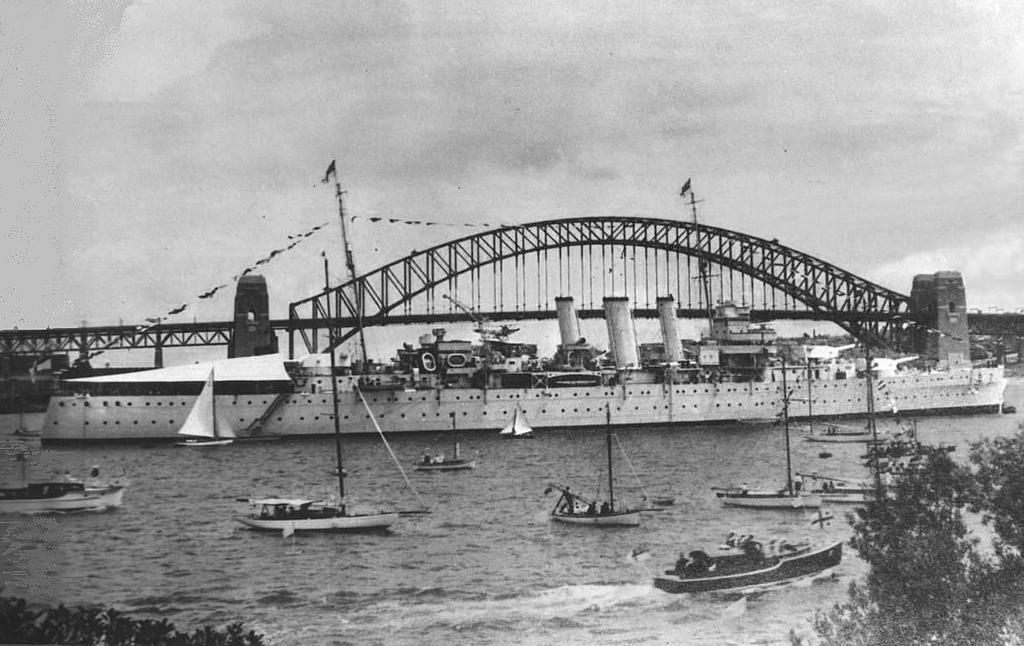 Nine RAAF Wapiti aircraft were timed to fly over as His Royal Highness’ ship HM Sussex passed by, the flag ‘broken on the mast’ and the national anthem played. The whole event must have been quite a spectacle with ‘thousands’ in attendance on this gazetted public holiday, bathed in ‘brilliant sunshine.’ 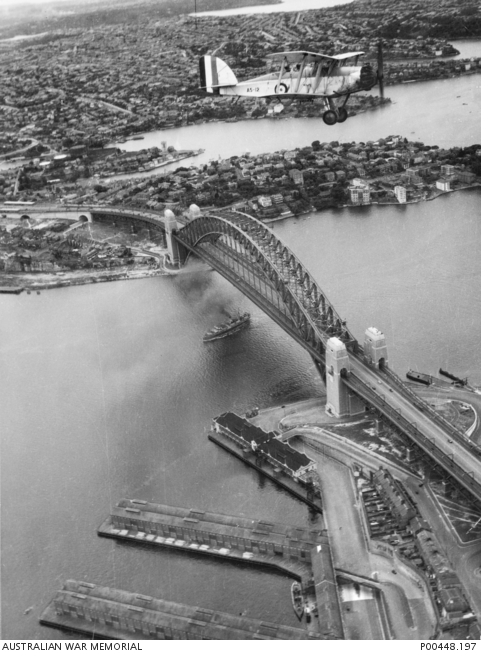 Westland Wapiti two-seater of No 3 Squadron RAAF based at Richmond photographed in flight over the Sydney Harbour Bridge. Source: AWM P00448.197

Interestingly enough, proposed plans dating from 1928 for a monument to HMAS Sydney at the entrance to Port Jackson over the reef known as Sow and Pigs have also come to light. 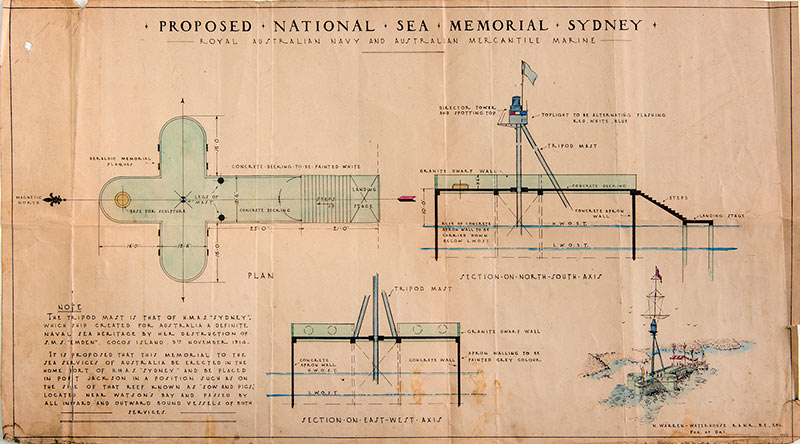 Proposed National Sea Memorial Sydney, 1928. This proposal by Engineer Lieutenant N.Warren Waterhouse, R.A.N.R. includes as its essential feature the tripod mast of H.M.A.S. Sydney and the reef at the entrance to Port Jackson, known as Sow and Pigs. Source: Trace, Mosman Digital Archive

Little else is known of these plans except that they did not come to fruition. The estimated costs of erecting the mast at the Sow and Pigs in mid 1929 meant that the project was “deferred”- permanently. It was also assessed to be logistically impossible to “surmount the Hyde Park Memorial with the tripod mast”, therefore, the HMAS Sydney Memorial Mast was destined to become a prominent landmark for visitors and viewers on the north, rather than the south side of Sydney Harbour.

Jack Carroll’s “fervent wish” was fulfilled. The HMAS Sydney Memorial Mast, dedicated in a “spirit of peace” has become “a treasured memorial from which future generations may absorb inspiration and guidance”.

It seems that the original proposal for the Mast was that it be placed with the Hyde Park Memorial, but that its weight and height ruled this out. The cost of the “Sow and Pigs” site (1,000 pounds) also proved to be too expensive at the time.

Evening News (Sydney) 31 May 1929
“H.M.A.S. SYDNEY MAST PROBLEM FOR DIGGERS”
“The secretary told the State Council of the Returned Soldiers’ League today that It would not be possible to surmount the Hyde Park Memorial with the tripod mast of the H.M.A.S Sydney, owing to it being 27 tons in weight, and 104ft high. It had been told that It would cost £1000 to erect it on the ‘Sow and Pigs,’ In Sydney Harbour. Consideration was deferred. The mast was bought for the league by a Toowoomba resident.”

The Argus (Melbourne) 19 October 1934:
SYDNEY DAY BY DAY!
A SPECIAL CORRESPONDENT “…The mast was preserved when the Sydney was broken up with the object of placing it in some prominent position. There was some difficulty in deciding upon a suitable situation, but ultimately, after most folk had forgotten that the mast had been preserved, a spot was decided upon. There was almost general agreement that it was a good site. Bradley’s Head will bear the mast, and as the Duke of Gloucester travels over the harbour on November 24 to visit Manly someone selected for the honour will break the flag on the mast. There are at least a few men in Sydney who consider that too much was made of the engagement with the Emden. The Commonwealth, however, has already indicated its friendliness to Germany. There is no suggestion of perpetuating bitterness in honouring Australian seamen….”