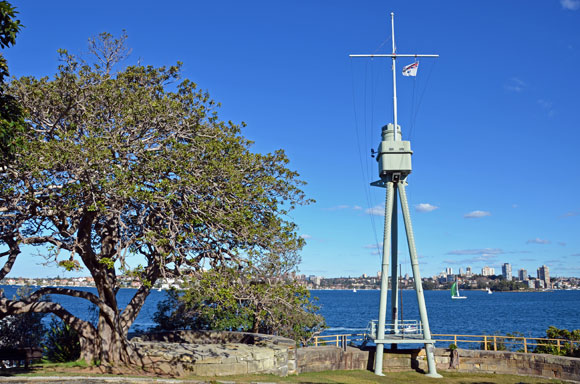 The third and last of the ‘main Memorials erected in the Municipality’ with a WWI connection has an appropriately prominent Harbour position at Bradleys Head.

It remembers the first engagement at sea during the Great War in which a ship of the Royal Australian Navy took part. Survivors of the “SYDNEY”-“EMDEN” action were present on the day it was formally instituted as a permanent memorial on 24 November 1934.

Dalton “Jack” Carroll was Mayor of Mosman at the time of its dedication and this is his account in The Streets of Mosman:

Early after the outbreak of World War I, the German Cruiser “Emden”, in charge of Captain Von Muller, had sunk no less than two million tons of Allied shipping and had cheekily bombarded Madras.

On the 9th November, 1914, a number of Australian Transports were making their way across the Indian Ocean with troops of the First A.I.F., the “Sydney” being one of the warships in charge of the Convoy.

“At about 6.30 a.m. the wireless operators of the troopships intercepted a message in an unknown code and later the wireless operator on Cocos Island reported that a strange warship was off the Island and was landing a party in boats. At 7 a.m. the “Sydney” detached herself from the Convoy to investigate.” It was the “Emden”.

“The latter, steaming out to sea, decided to fight. The action commenced at 9.30 a.m. and at 10.30 a.m. the “Emden” was helpless and was driven ashore at 1l.20 a.m. on North Keeling Island, a blazing wreck, with 134 of her crew of 318 either killed or injured.” It was the first Naval engagement of an Australian Warship.

When the “Sydney” was placed out of commission and dismantled, the Mast was purchased by a Queensland resident, Mr William Rankin and presented to the R.S.S. & I.L.A. For many years it lay at Cockatoo Dockyard, many attempts being made to place it in some suitable position on Sydney Harbour, without success.

When it was known that H.R.H. The Duke of Gloucester was to visit Australia in 1934, the Mosman Council, following a suggestion made by a resident – Mr N. Ellison – decided, if possible, to obtain the Mast and erect it at Bradley’s Head. Firstly in honour of the Royal visit and secondly to preserve such a historic memorial of a famous warship.

After a great deal of negotiation, in which all bodies concerned were most co-operative, the thirty-ton Mast was transported from the Dockyard by the floating crane “Titan” and successfully lowered into permanent emplacements, designed by the Council’s Engineer, J. Dee, on the 24th October, 1934. 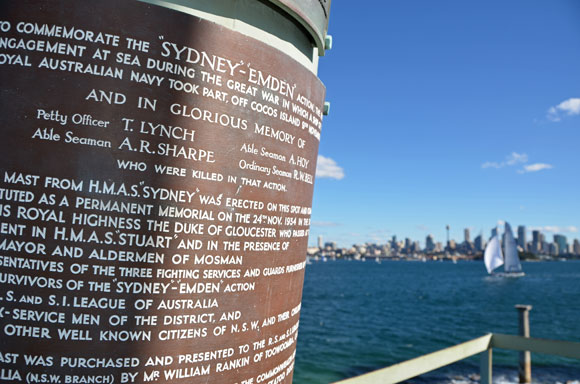 Great efforts were then made to have the Dedication Ceremony performed by H.R.H. The Duke of Gloucester during his visit, but as his itinerary was a heavy one and had already been meticulously decided on, it was found impossible, in view of the many other functions.

However, during the whole of the arrangements, the Royal Australian Navy, through Capt. C. J. Pope, R.A.N. (Capt. Superintendent of Garden Island and Navigating Officer of the “Sydney” during the action and the War) and his officer, Lt. Commander R. B. M. Long, R.A.N., M.A., Naval Establishment, had taken a keen personal interest in the proceedings.

It was decided that it would be most fitting if the Navy took charge, which they did in their own inimitable way and everything worked ou t quietly and diplomatically. It was found that H. R. Highness was to go down the Harbour on Saturday, 24th November, 1934, to be present at a large Surf Carnival at Manly, and that he was to be conveyed by H.M.A.S. “Stuart”. Officially he could not be present, but …

“‘Stuart’ is to pass close to Bradley’s Head, easing to dead slow on approach and not increasing speed until well past (the Dedication Ceremony of the Mast of H.M.A.S. “Sydney” will be timed by the “Stuart’s” movements) so that as “Stuart” draws abreast, the Commonwealth Blue Ensign will be broken on the Mast and the National Anthem will be played.”

The fact that the “Stuart’s” movements broke all the Harbour “Rules of the Road” was a minor affair. Besides the Naval Guard, there was a special Guard of Honour of men who had served on the “Sydney”, including the bugler who had sounded “Stations” on the day of action. With 9 Wapiti planes overhead, and representatives of all Naval, Military and Public Services and some thousands of the Public surrounding the Mast, a most impressive ceremony resulted.

When the new H.M.A.S. “Sydney” returned from World War II on the 10th February, 1941, after her victory over the Italian Cruiser “Bartolomeo Colleoni”, its Commander (Capt. J. A. Collins) dressed ship and saluted the Mast of his vessel’s predecessor. 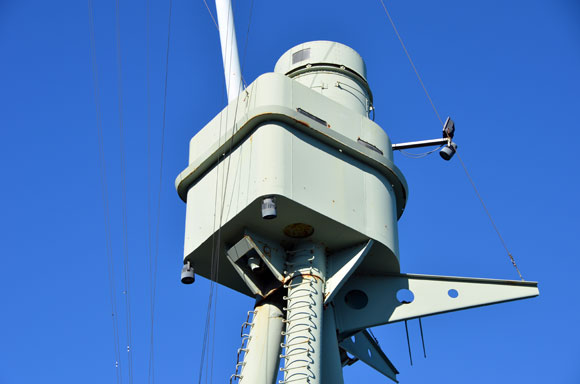 On the Mast in bronze letters are the names of the Petty Officer and the Men killed in the action.

Wikipedia has an overview of HMAS Sydney (1912) and lists other memorials that feature parts of the ship like the seawall at Milsons Point. Refer also to Battle of Cocos.