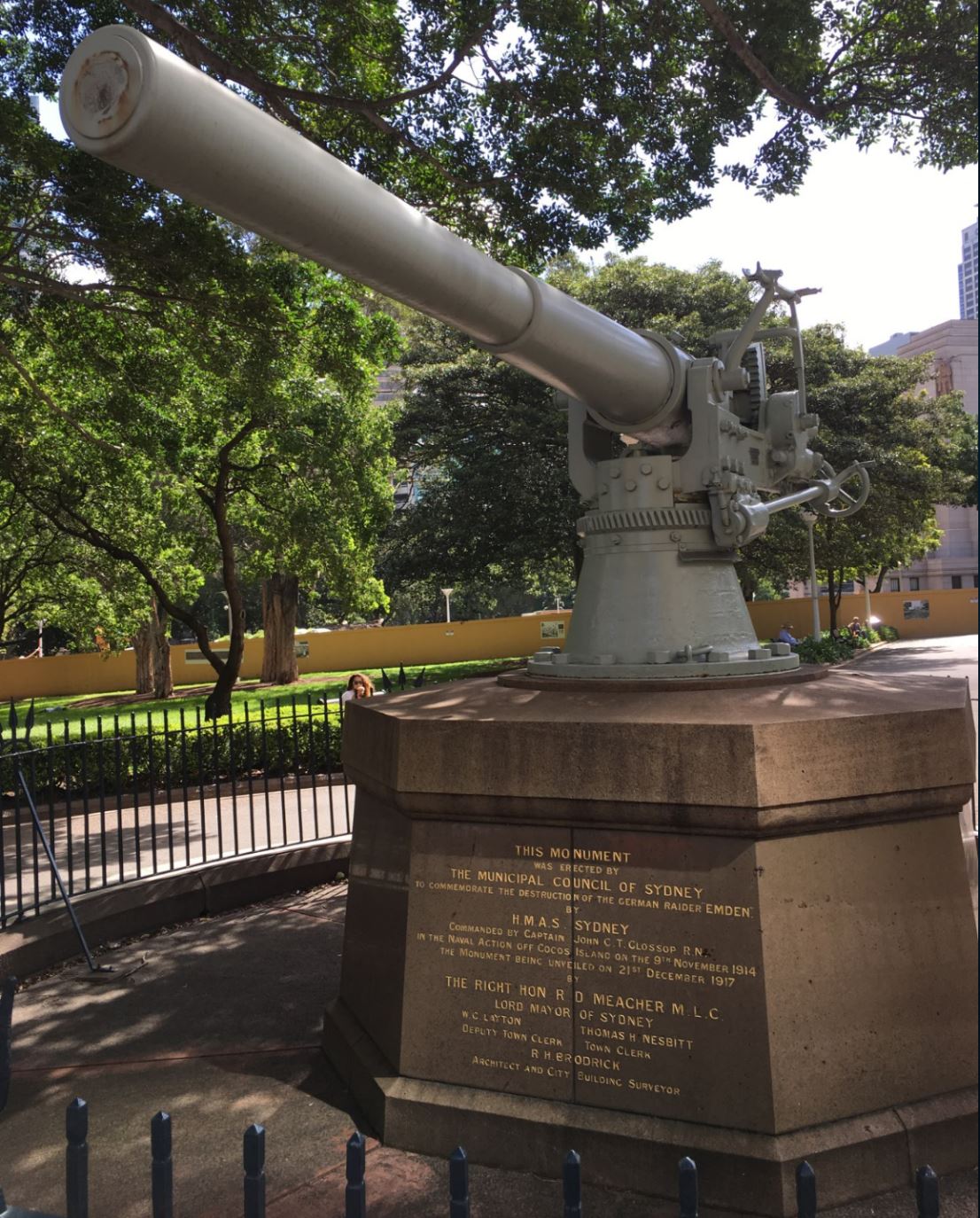 There are 3 permanent memorials in Sydney to the victory of the Cruiser Sydney (l) over the German sea raider, SMS Emden on the 9th of November 1914.

Arguably the most imposing is the HMAS Sydney mast at Bradley’s Head, Mosman. 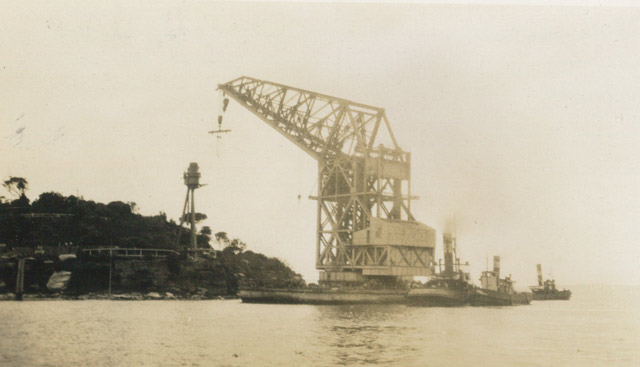 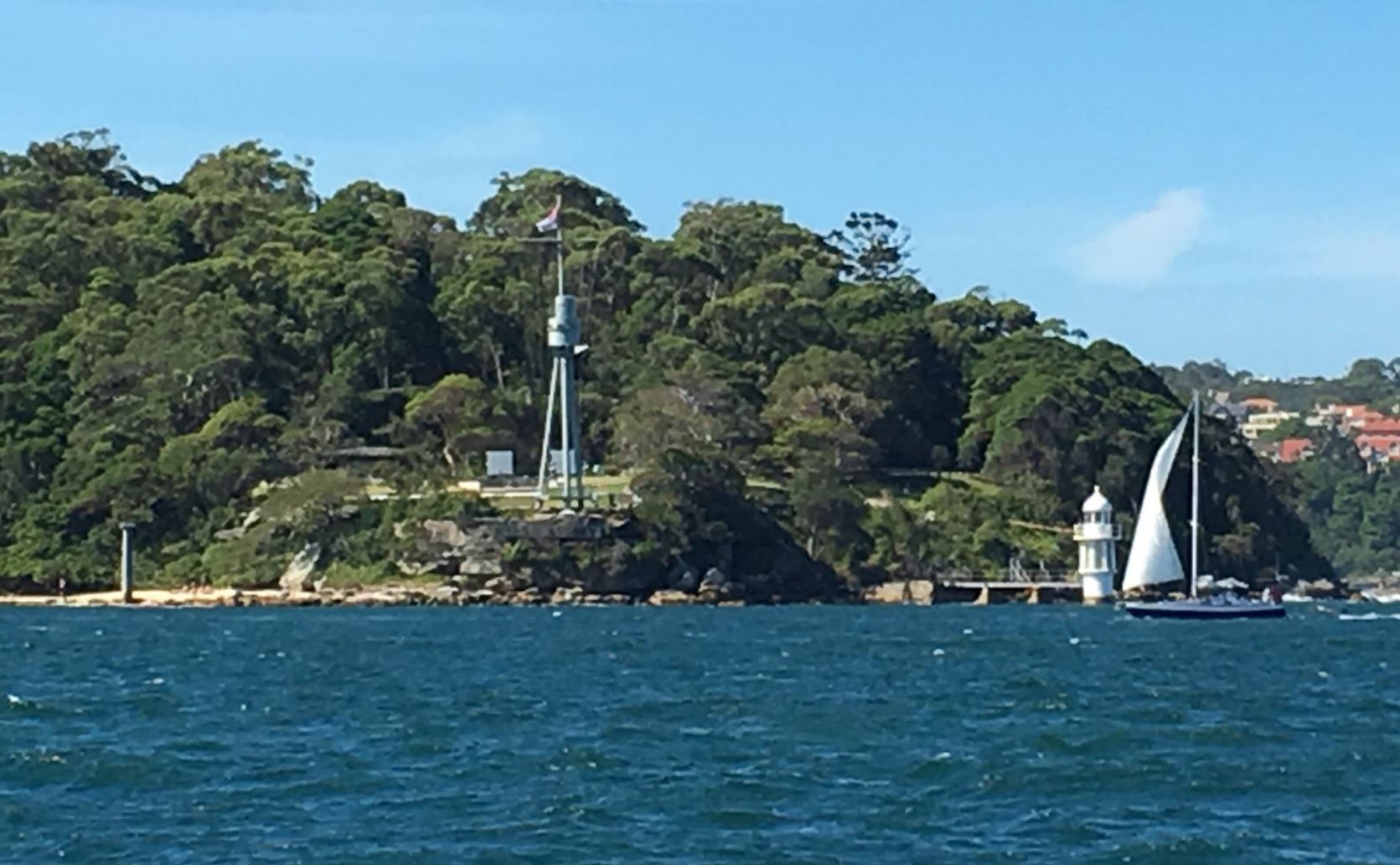 The mast was ceremonially dedicated in 1934 (on the same day as the Hyde Park War Memorial.) The Bradley’s Head location was chosen after plans for the ‘Sow and Pigs’ reef and Hyde Park Memorial fell through in 1929.

Another memorial is located at Milsons Point, North Sydney (under the Harbour Bridge.) Here part of Sydney’s bow protrudes from the sea wall. 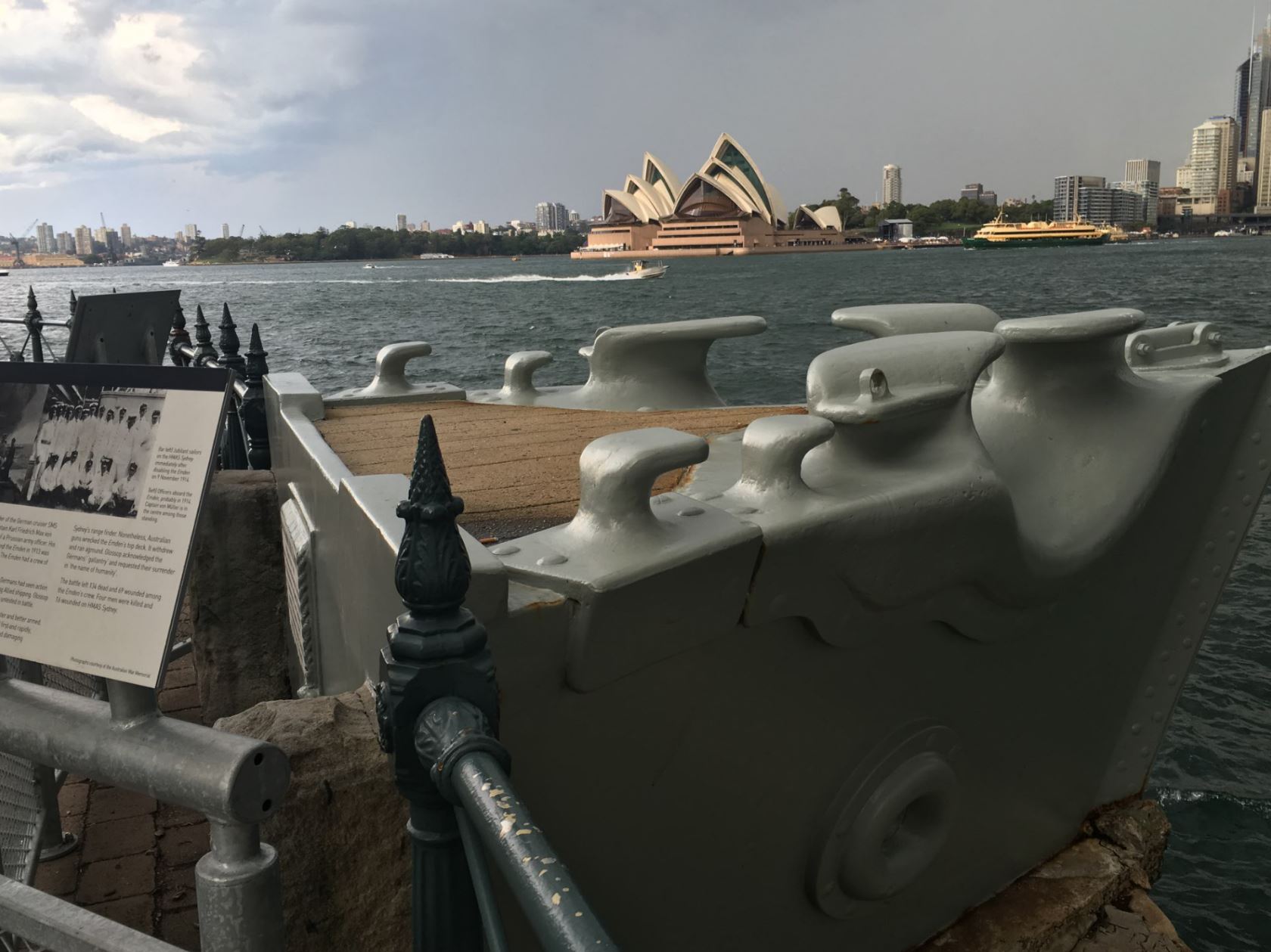 The 3rd memorial is the Emden gun located in the south-east corner of Hyde Park, pointing up Oxford St.1 It was officially dedicated, 100 years ago today. 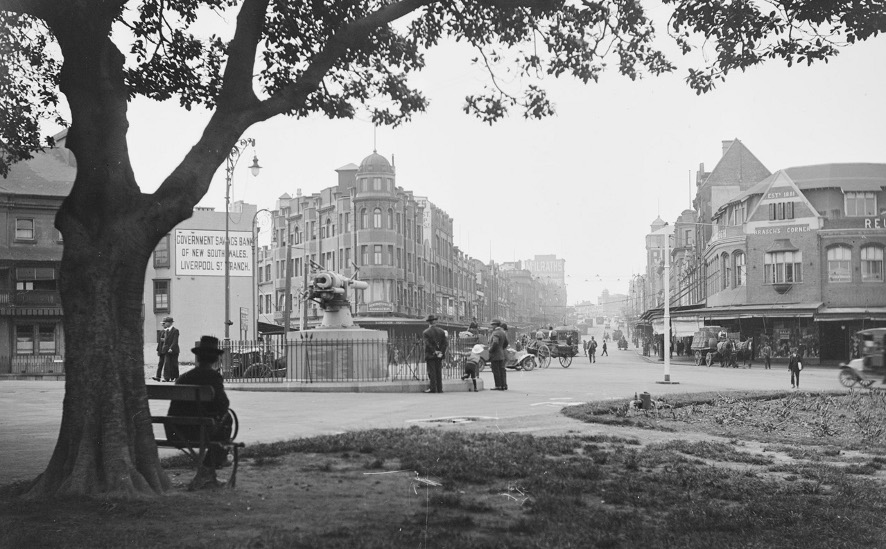 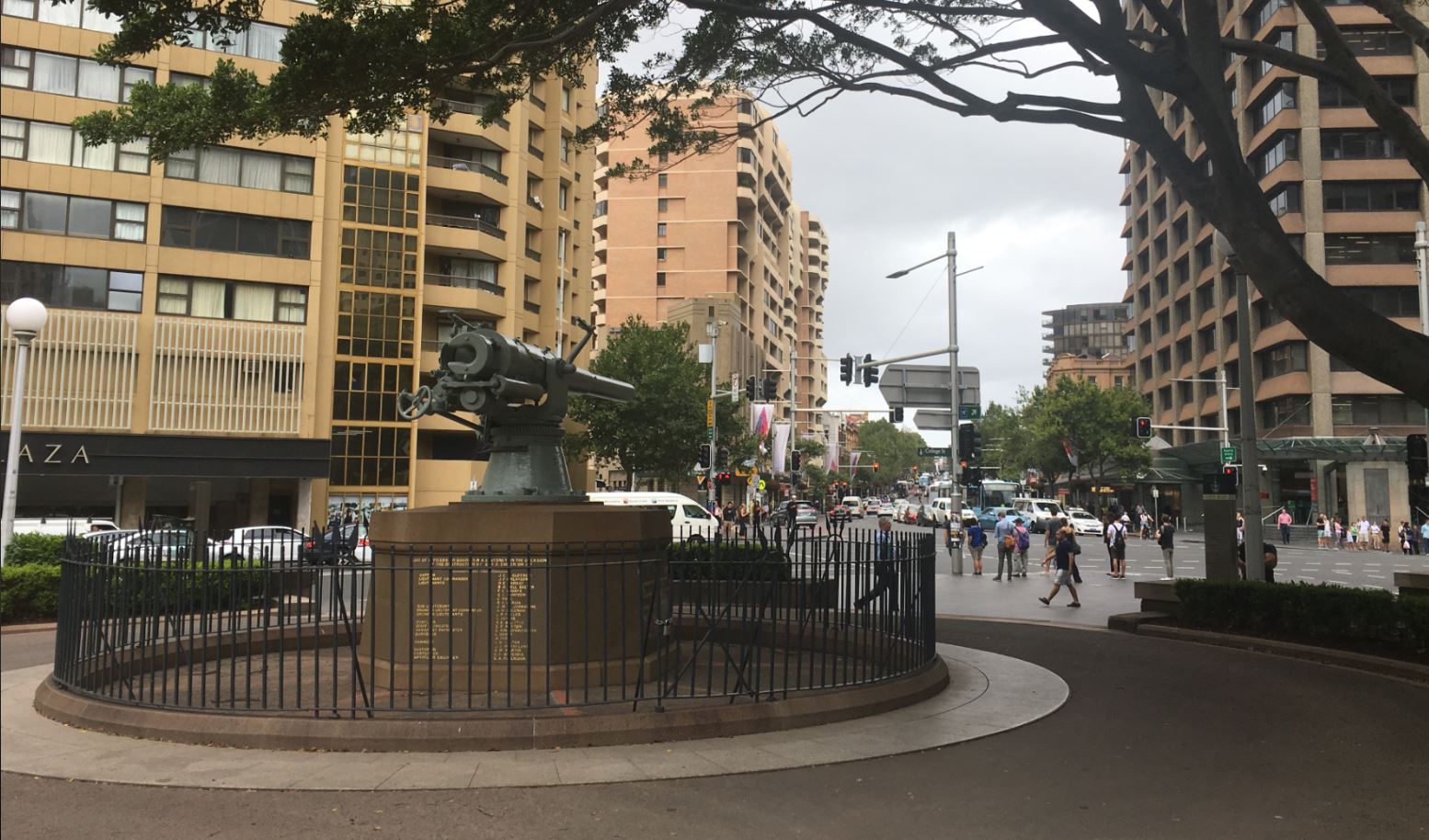 The unveiling of the Emden gun on December 21, 1917, was attended by thousands. In the crowd were civil dignitaries, veterans and crew from the HMAS Sydney . The Sydney Morning Herald reported

The naval gun captured from the German raider Emden by the Australian cruiser Sydney, and presented to the City of Sydney by the Commonwealth Government, was formally unveiled in Hyde Park, near the intersection of Oxford, College, and Liverpool streets, at noon to-day, by Alderman Meagher, the Lord Mayor.

An enclosure had been erected around the polished trachyte pedestal on which the gun is mounted, and the vicinity was gay with bunting

The scene was exceedingly picturesque, with the brilliant sunshine and the gay colours which flew above the enclosure, where many leading citizens gathered…The Headquarters Band from Liverpool..provided the music. The gun was covered with the Union Jack.. 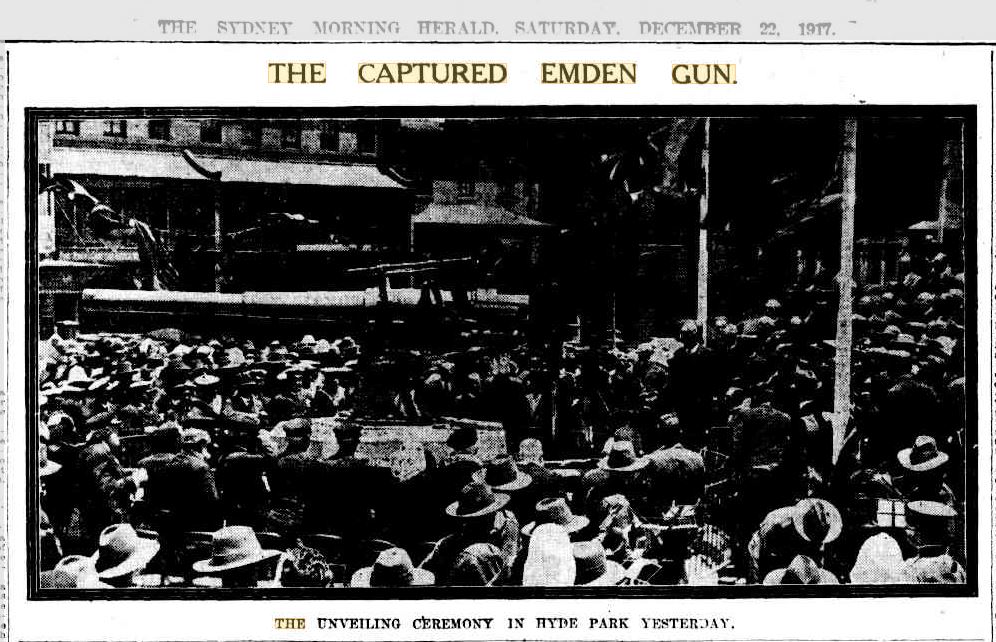 Prominent citizens were in attendance.1 Mr. Cook, Minister for the Navy, and Captain Glossop, commander of the Sydney at the time of her encounter with the Emden, were among the dignitaries.

The Lord Mayor then related the circumstances of the historic sea fight. The Lord Mayor, in unveiling the gun, said:

We are assembled today to participate in an historic function to unveil a trophy of war won by the youngest navy in the world under circumstances which bring a thrill of pride and gratification to all true Australians and faithful sons of Empire that the young Australian navy is worthy to rank with the great and glorious parent-the British navy, not only in courage, seamanship, and devotion to duty, but also in mercy and magnanimity extended to a beaten foe. (Cheers.)2

Three cheers were given for Captain Glossop, his officers and crew, as the Mayor released the flags and the gun was unveiled.

Mr. Cook then spoke about the importance of the British Navy to Australia. He also told of the need for Australia to develop a ‘sea sense’ for its own protection as a part of the British Empire.

Mr. Cook said it was a happy idea to associate the gun with the great city of Sydney. It would remind them of all that lay in the wonderful fabric of self-government..3

‘What has that to do with the gun?’

The 1916 plebiscite on conscription had split the nation. On Dec. 20th, Australians were asked again to vote ‘YES’ or ‘NO’. Captain Glossop used the public occasion on the 21st to vent his feelings about the results 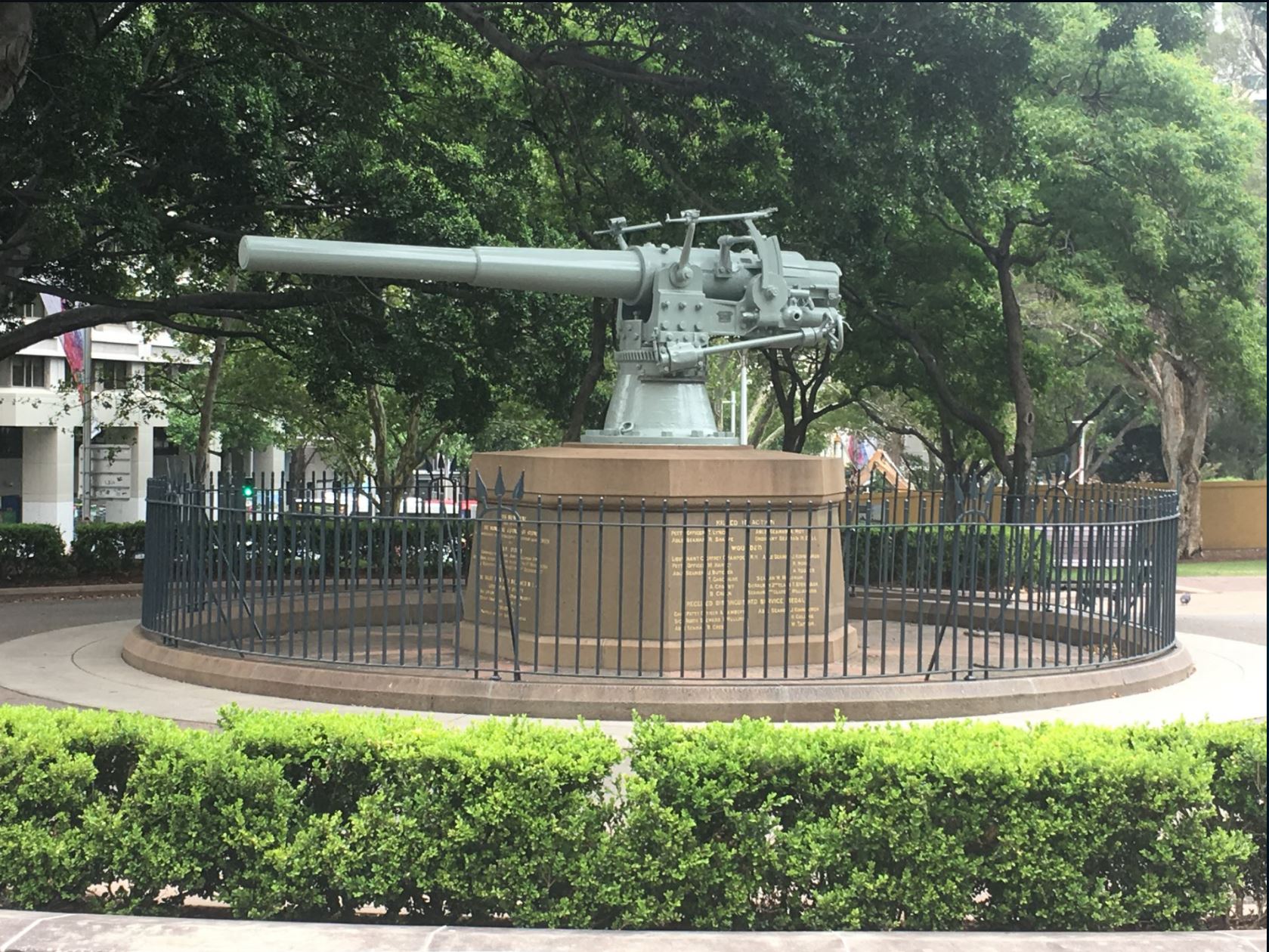 “It is,” [Glossop] sald, “with very mixed feelings I came here today. You must all know about the great referendum which has just taken place, and what my feelings are on the subject. You have given for the second time a decided ‘No.’ (Dissent, and cries of “No, not yet.”) And seeing this gun in front of you here, do you still refuse to reinforce your men at the front. (Voices: “No, no.”) By your votes yesterday you said “Yes.” “

If everybody were allowed to do what he liked on a ship,” continued the Captain, “how could any action be fought or work carried out ? The Government put a proposal before you and you turned it down.”

(Dissent on the outskirts of the crowd and a voice, “What has that to do with the gun”?)

“I daresay I am encroaching on a political subject,” Captain Glossop went on, “but how can I help it ? Your vote yesterday said “No” by a larger majority than on the previous occasion. The feelings of our naval and military ratings are the same. They emphatically asked you to say “Yes,” and you said “No.”

I consider that you hear too much of what you like to hear. You need to hear a few of the things that you will not like to hear. I am no speaker, and you could put me down with ease, but you certainly require to hear a little of the plain truth about many things4

After a few more minutes of attempting to shame young men who refused to volunteer, Glossop ended, reciting Kipling -

Cheers were given for the King, Captain Glossop, and the H.M.A.S. Sydney boys, and the proceedings terminated. 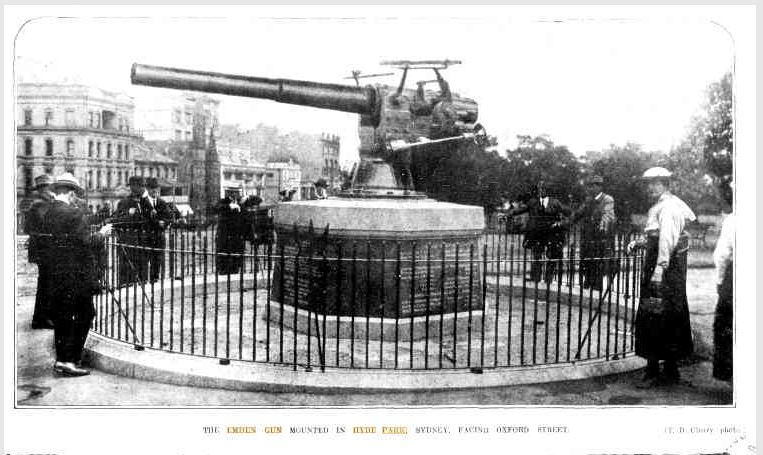 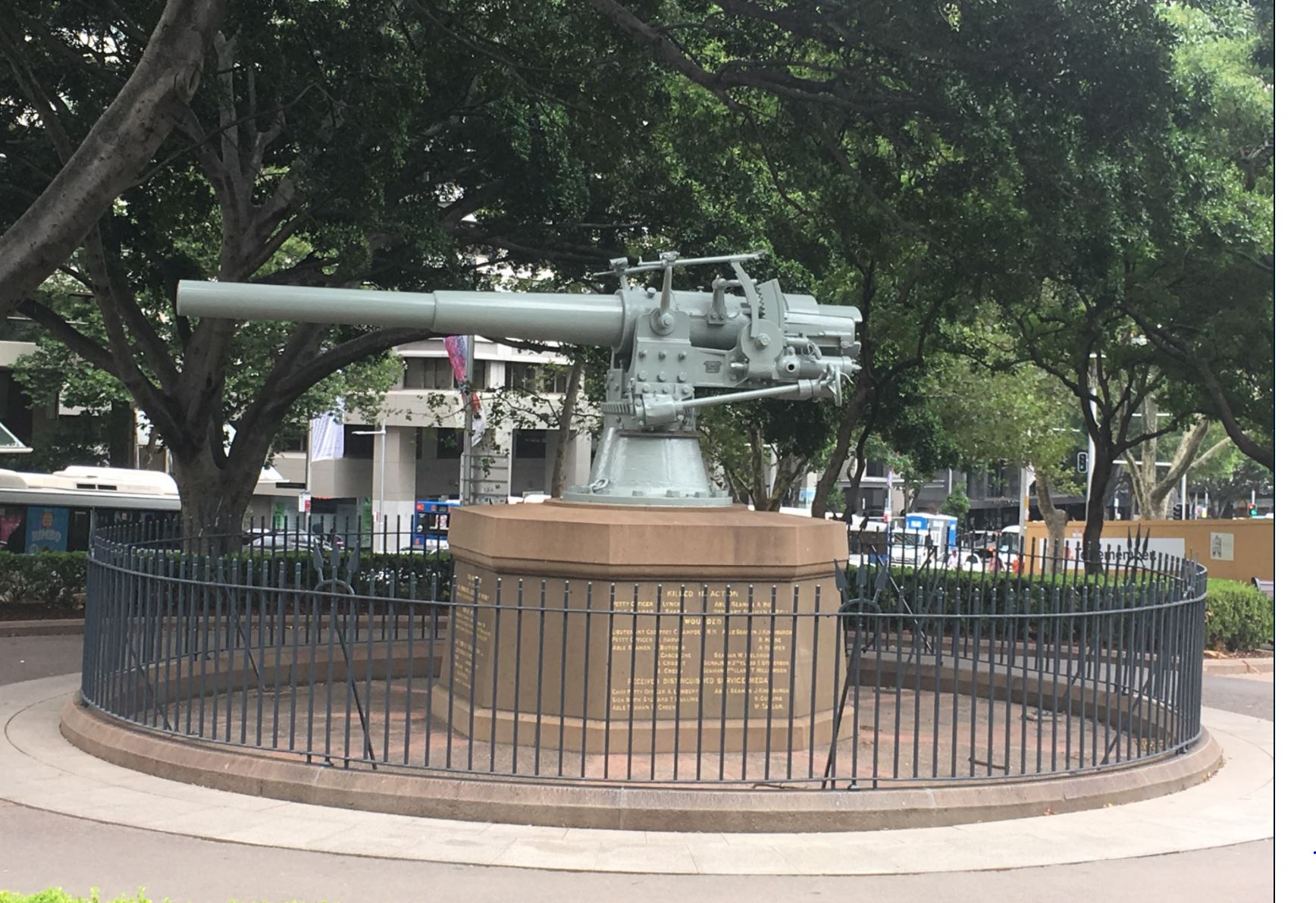 Sydney memorial in Hyde park. SMS Emden Gun pointing up Oxford St. Photo by the author. Taken on 100th Anniversary of its unveiling 21/11/1917

Mutiny on the battleship Australia 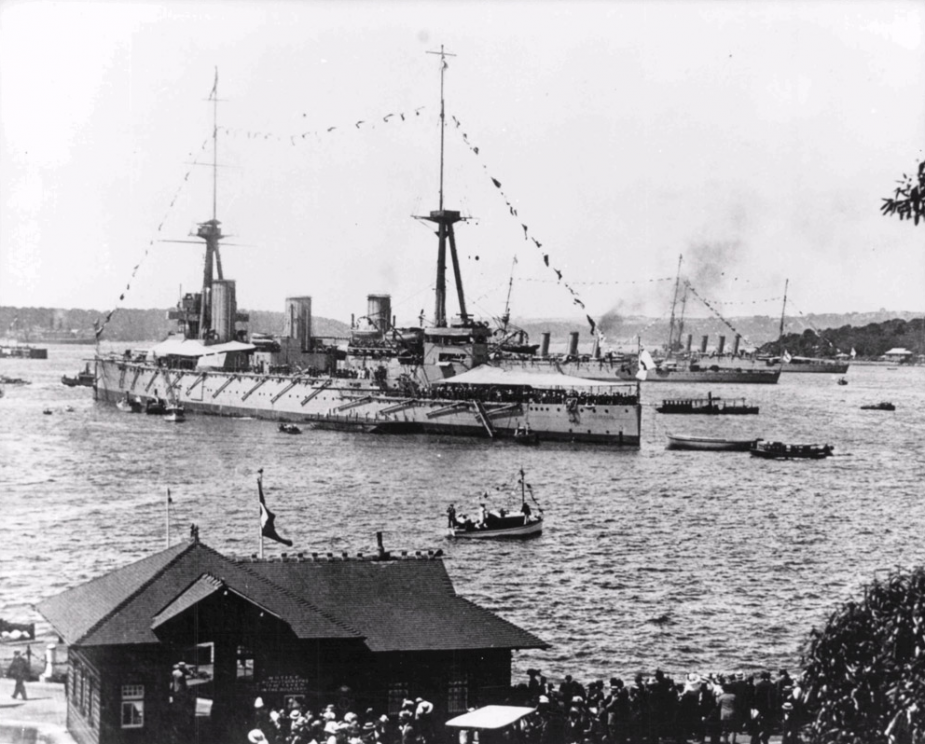 Battleship HMAS Australia docked in Sydney Harbour with the Grand Fleet in 1913.

At the time of the Emden gun unveiling speech Captain Glossop had been promoted ‘Captain-in-charge of naval establishments.’

This post, third in importance in the Australian Navy, brought him into sustained contact with civilian attitudes to the war; deeply patriotic himself, he was upset by the slowness of recruiting and the difficulties involved in dealing with unions in the manning and coaling of ships.5

Glossop may have humoured ‘‘NO’ voters during his speech, but dissent in the ranks was another matter.

After the war Glossop would pass judgement on another ship’s crew for such a transgression, in a little known incident in Australian history.

The stokers have left the boiler room

In 1919 the nation’s flagship, HMAS Australia, returned home after years of war service. She missed the Battle of Jutland but participated in a bold commando raid on Belgian ports. 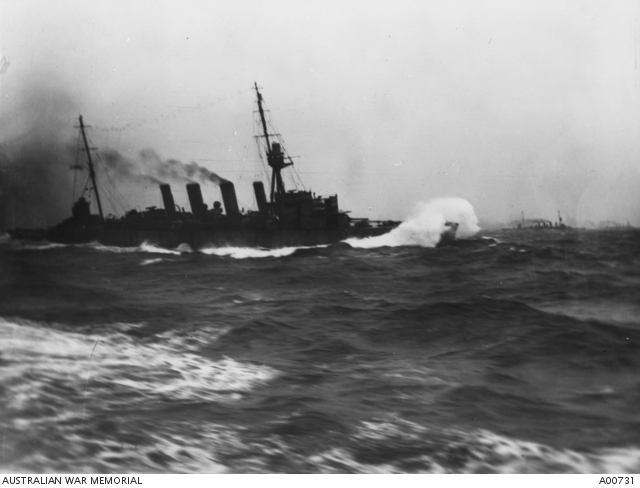 HMAS Sydney at full speed in a heavy sea off Dogger Bank.

Australia’s crew had seen little action during the war and duty aboard had been monotonous; there had been several misunderstandings relating to pay and enlistment conditions; leave in Britain had been severely limited ..and discipline was perceived as being unduly harsh, particularly after the end of hostilities. Australia was not a happy ship.7

Crew collecting their pay on board HMAS Australia.

At Fremantle extended shore-leave was denied. Sailors felt aggrieved that they could not continue to enjoy the hospitality of the locals. For some this was the final straw.

When Capt. C. Cumberlege gave the order to ‘let go aft’, a report came to the bridge that the stokers on watch had left the boiler rooms.8 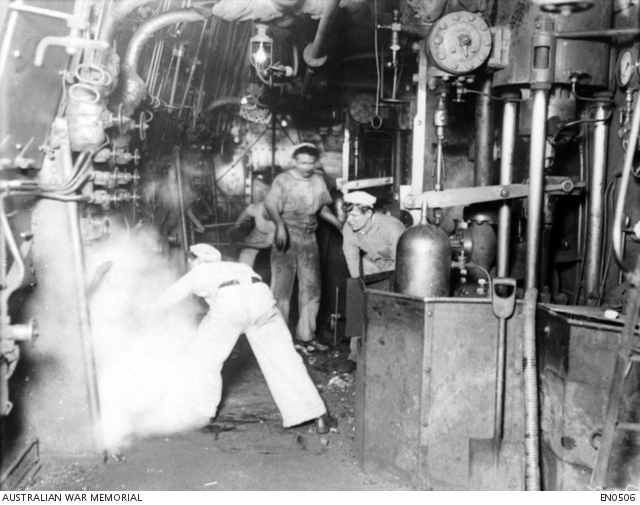 Unidentified stokers at work in the boiler room on board HMAS Australia.

After this ‘stop work’ action, 27 men were given 90 days behind bars. 12 were arrested and charged with mutiny. 5 were court-martialed.

In Sydney Capt. Glossop presided over the trial. The sailors pleaded guilty and asked for clemency:

Our respective ages range from l8 to 23 years of age, and we have been on active service, principally in the North Sea, for periods ranging from three to five years….When we returned on board Sunday morning, and learnt for the first time that the ship was sailing in an hour of two, a great deal of resentment was evidenced among the crew. Personally, we are not too clear of what followed, as we were feeling more or less the effects of the four days’ festivities.

Certainly we did not realise the seriousness of attempting to prevent the departure of the ship, or that the same would be tantamount to an act of mutiny. In placing ourselves on the mercy of the Court, we express the hope that the members thereof will remember our record of services, also the great mental strain our relatives have been subjected to, and ask that clemency be exercised towards us.9 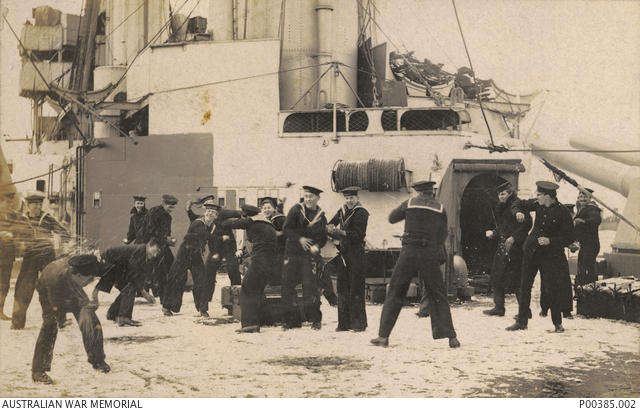 SAILORS PLAYING IN THE SNOW ON THE DECK OF HMAS ‘AUSTRALIA’ IN THE NORTH SEA.

No luck. They were handed very harsh sentences, including up to 2 years of imprisonment. 1 unfortunate mutineer was given 2 yrs. hard labour.

The severity of the sentences caused a political uproar and [Glossop] was attacked in the Federal parliament. He was defended by the acting navy minister but the affair may have contributed to his failure to be appointed Australian naval representative in London, a post for which he was recommended by the Naval Board.10

Sydney I’s sailors were eventually shown clemency after the public outcry and Government appeal to the Admiralty. 2 senior officers including Sydney’s Commander Capt. Dumaresq offered to resign over the matter.11 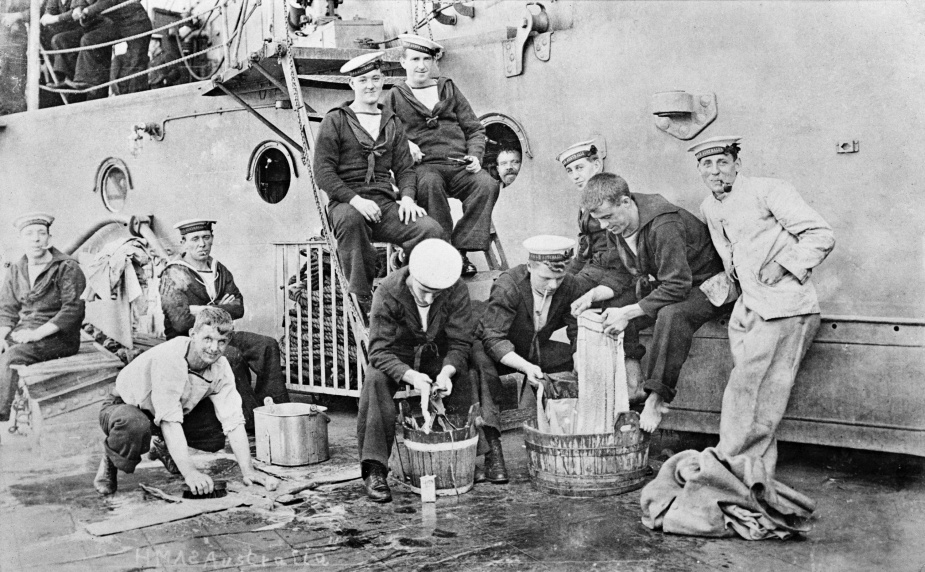 After the fall-out from the court-martial Glossop served overseas in the Royal Navy, and was promoted to Rear Admiral in 1921. He retired next day for a quieter life with family in Devon, England.12

His professional career included being Mentioned in Dispatches in 1914 and appointed a C.B. for destroying the Emden. He was awarded the Japanese Order of the Rising Sun and the Légion d’honneur, in 1917.13

HMAS Australia was scuttled in 1924. She was replaced by her namesake. Australia II saw plenty of action in WW II.

Emden’s survivors were interned for the duration of the war. Her crew on Direction Island made a daring and arduous escape, back to their homeland; Emden’s Captain and crew became decorated as heros. The ship itself was awarded a posthumous Iron Cross, which Emden (II) displayed on her bow. Crew members were even able to take the surname ‘Emden’ to pass on to their children

HMS Sydney (1) went on to have an interesting wartime career. Her mast at Bradleys Head, bow at Milson’s point and Emden’s gun at Hyde Park, are all open-air memorials in Sydney, viewable at any time. 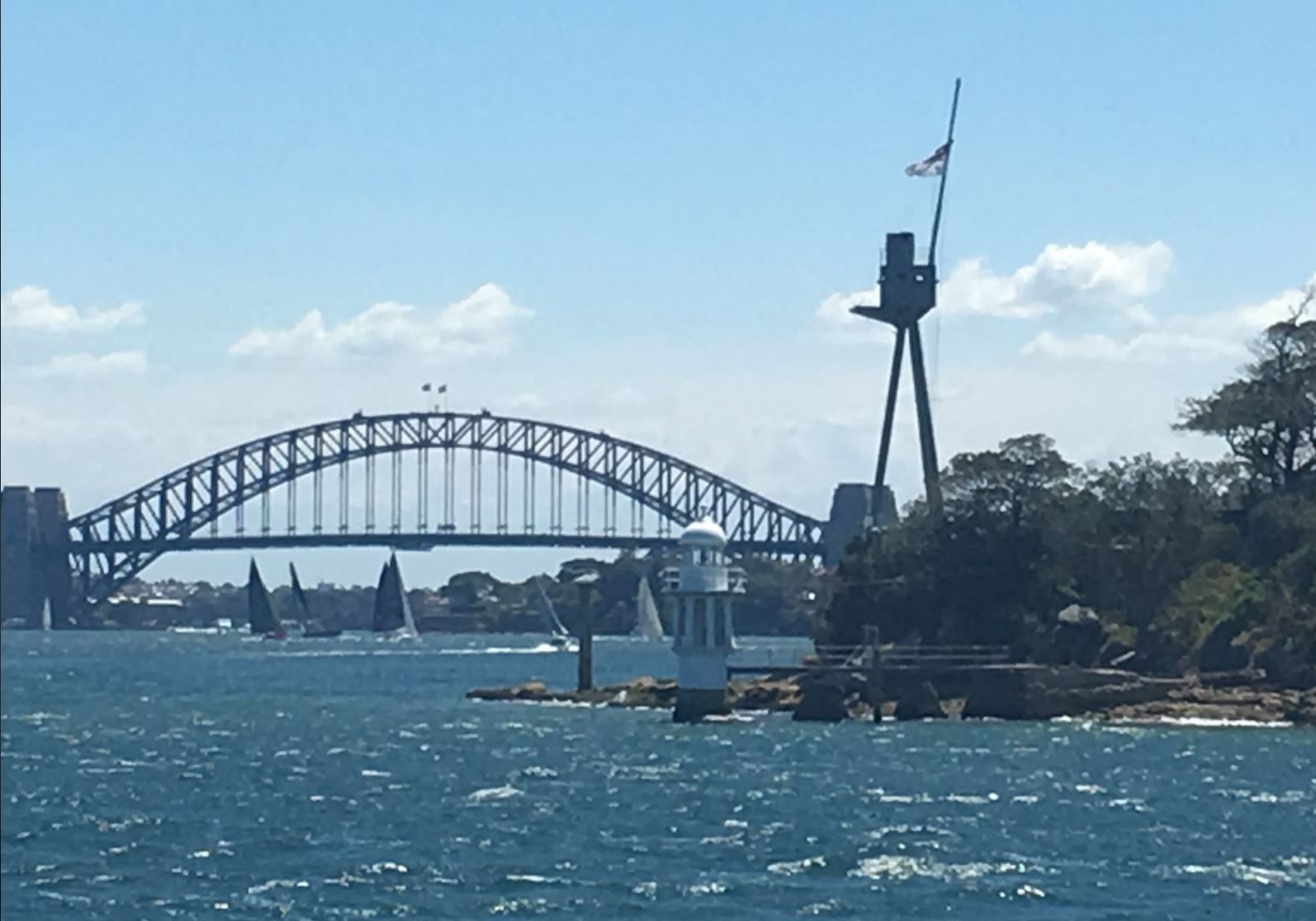 1 Other Emden guns are on display at the AWM, the RAN Heritage Museum and HMAS Penguin. 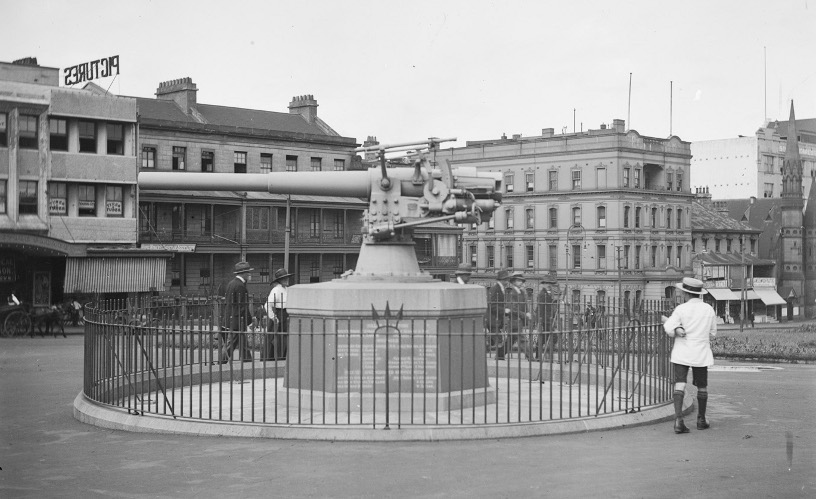 On the northern face:- 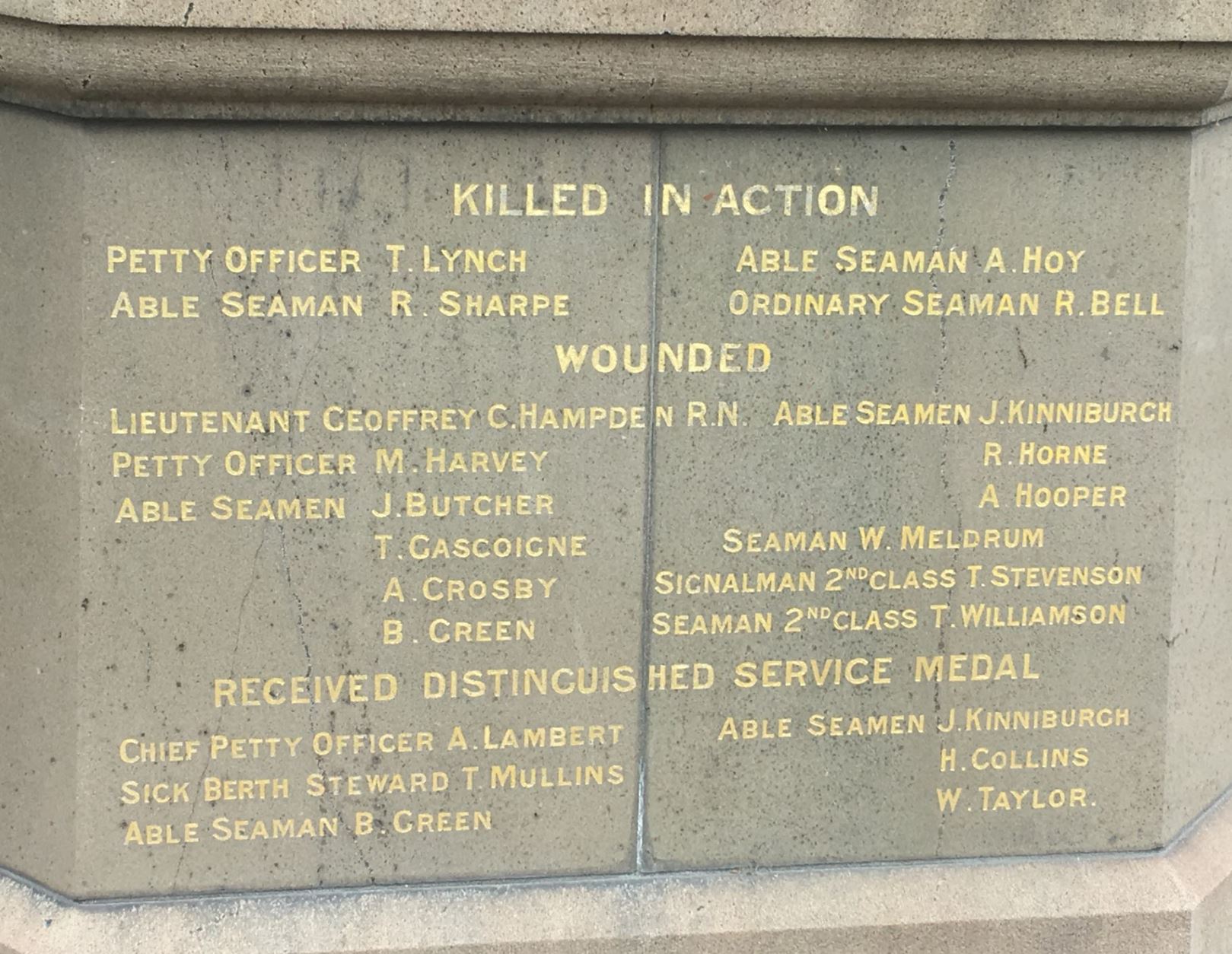 On the eastern face is the following Inscription:- 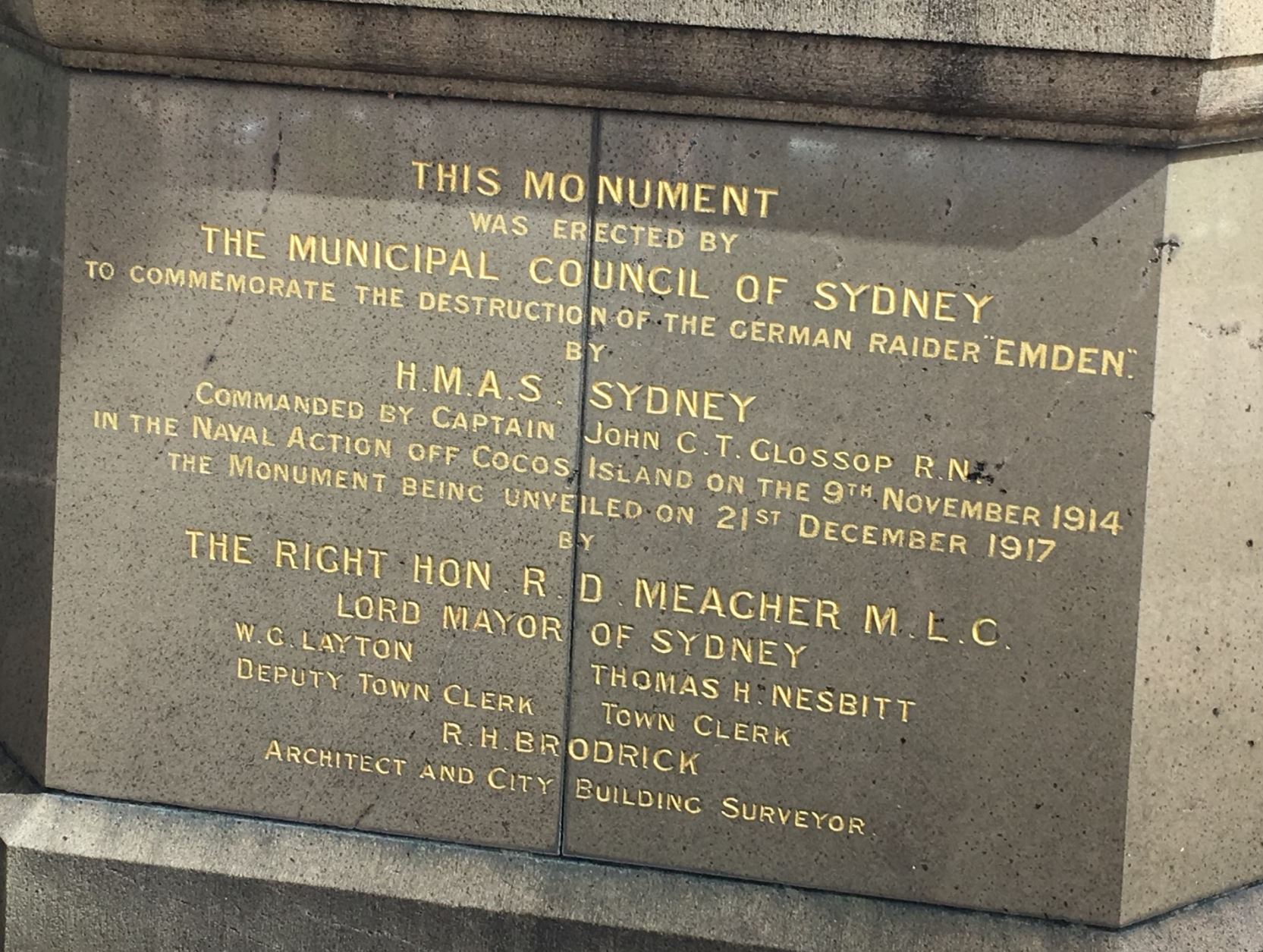 On the southern face:- 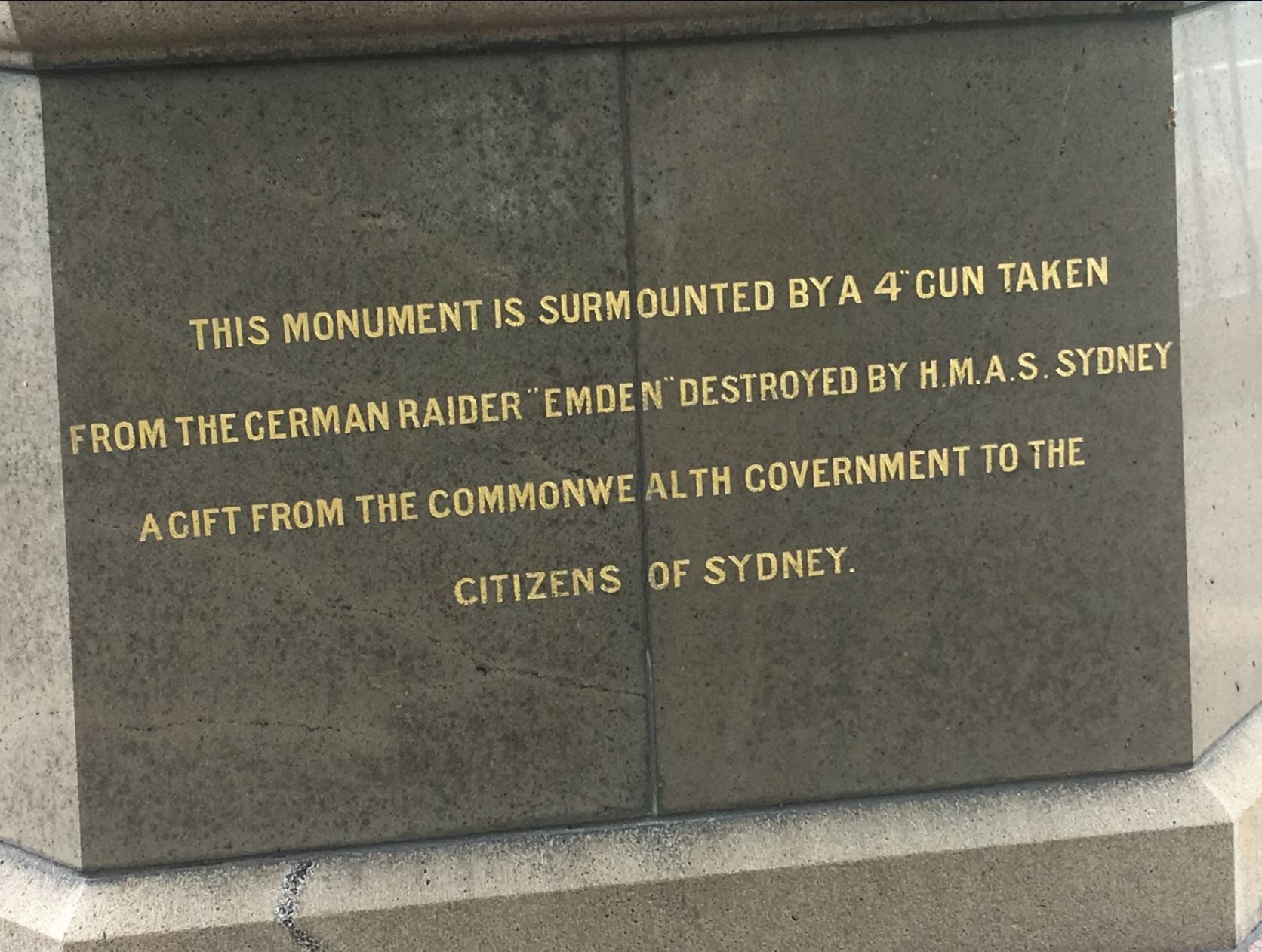 “This monument is surmounted by a 4-inch gun taken from the German raider Emden, destroyed by H.M.A.S. Sydney. A gift from the Commonwealth Government to the citizens of Sydney.”

On the western face is the following:- 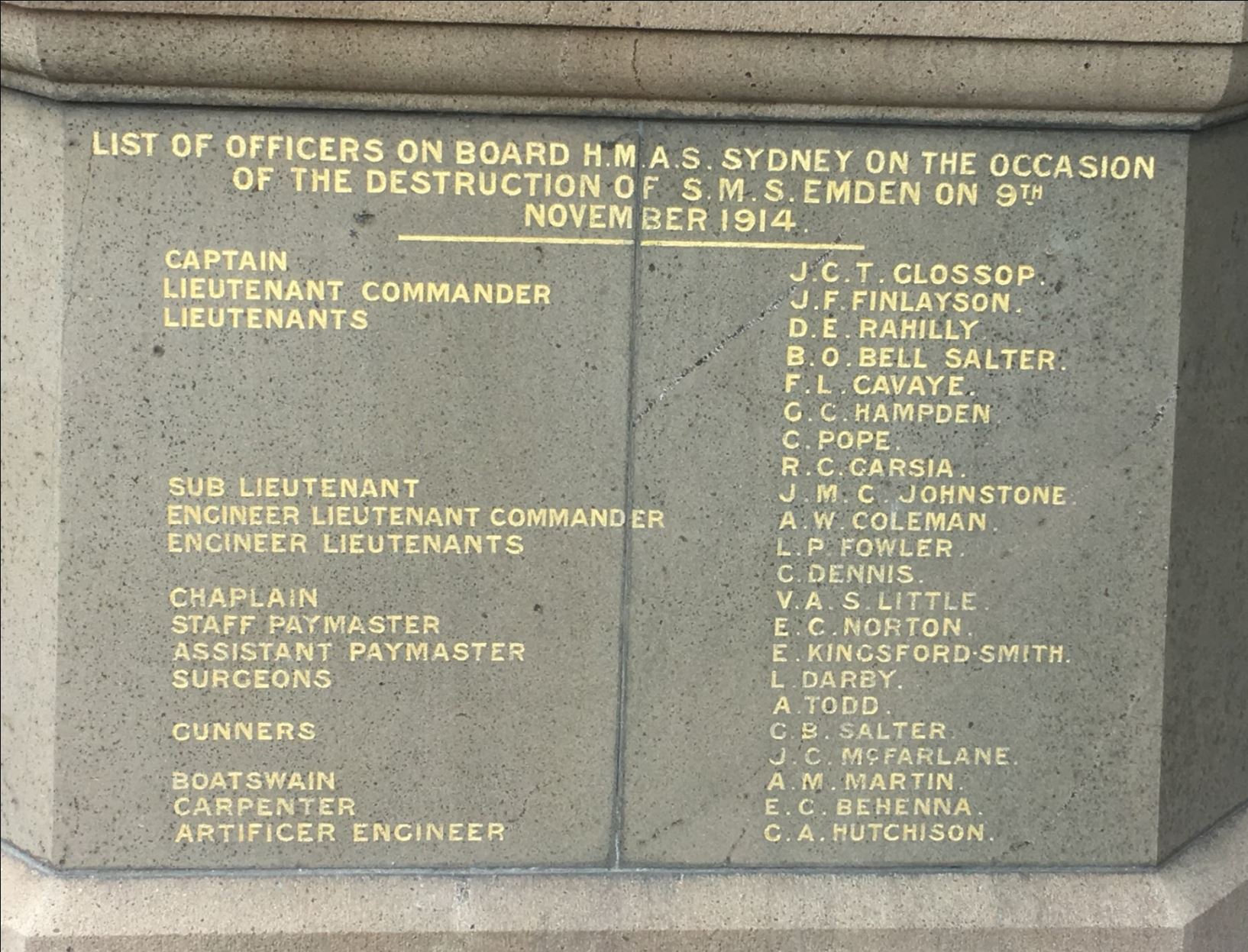