Finding your Anzacs on a map

One you won’t find on Google Maps. (Source: AWM)

At some point in your research you will want to locate a place with precision. Google Maps is a great resource but some names have changed since 1918, and Google will not always be able to help you with a trench map reference, or a colloquial name that was used only by the soldiers at the time.

A gazetteer is, says Wikipedia, a geographical dictionary or directory, an important reference for information about places and place names. These gazetteers will help match historical to modern place names – try Wytschaete for example.

Detailed, up to date maps were needed for both attack and defence, and millions were printed during the First World War. Typically they show a base map with roads, towns and other important features overprinted with Allied and German trenches and a reference grid. 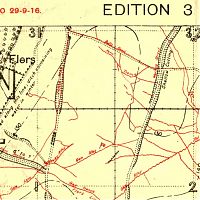 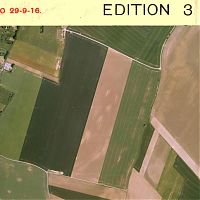 Allan Allsop’s diary records him being at 8th Field Ambulance posts at Needle Trench and Gun Alley to the right of Flers. They are marked with red flags in the trench map extract above, alongside an approximate modern view. (Source: LinesMan, Google Maps)

War diaries will frequently refer to positions on these maps with map references like “36A F.4.b.9.4” or “Sheet 28 NW.G.12b”. They are not hard to read once you’ve deciphered two or three.

Robert Warren of the Muninn Project has created an API to convert Western Front trench map coordinates to and from longitude and latitude. And he’s made available a web page that you can use to find coordinates on a modern map.

This is a boon for anyone working through a unit war diary, wanting to find quickly the locations and places referred to by the map coordinates. Read more on Warren’s blog post, Converting British Trench Map Coordinates.

Bill Frost has compiled an excellent resource to locate a relevant trench map:

Newcomers to the forum often ask where they can get a trench map that shows a specific location, such as Bethune or Bois de Ploegsteert. Often they don’t know whether it is in France or Belgium. Here is a resource I hope proves useful – a freely downloadable spreadsheet showing 4,500 regions, towns, woods or streams. Each has its latitude, longitude, link to Google Earth and trenchmap reference. There are also a handful of chateaus & farms. Once downloaded, it can be sorted or searched.

More difficult is finding the map, but there are free sources:

New British First World War Trench Maps, 1915-1918 from the National Library of Scotland allows you to browse by map sheet and overlay trench maps on Google and Bing maps.

Remember also to look in unit war diaries as they often incorporate maps. Look up the chain of command for their diaries too.

There are also trench map collections for sale.

The art and science of Great War mapping

If you’re interested in the evolution of mapping, and the development of technologies like aerial photography and sound ranging in the First World War, the following document is the most valuable primary source:

Updated this post to include the excellent National Library of Scotland collection of British trench maps. You can overlay these on modern Google and Bing Maps.