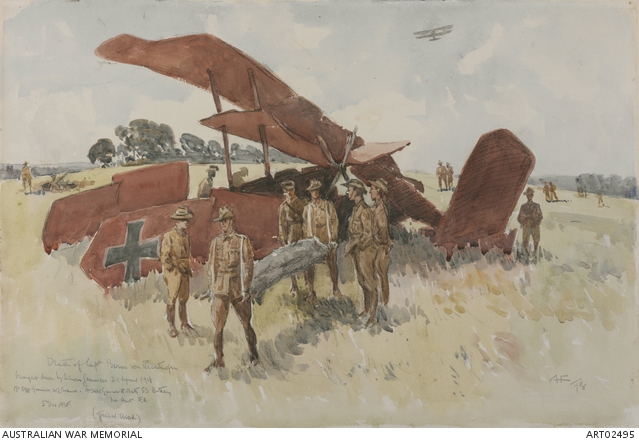 by A Henry Fullwood, The death of Baron von Richthofen
Watercolour with pencil and charcoal on paper. Source: ART02495

Dr Geoffrey M. Miller drops into Barry O’Keefe Library on occasion and I’ve enjoyed our chats. His medical findings about the death of the Red Baron are used in journal articles as an authoritative source. 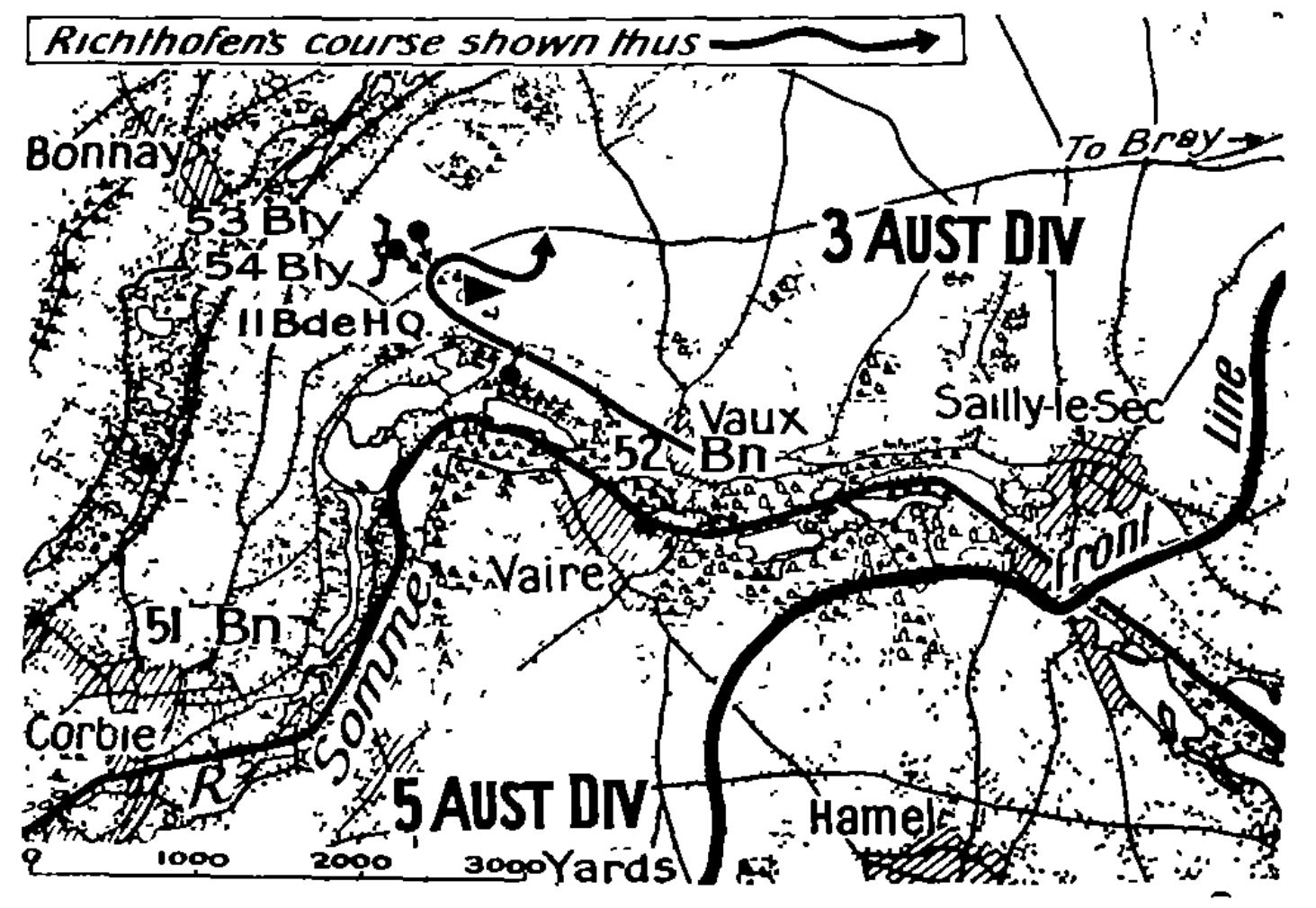 1. Richthofen was shot by Captain Brown. 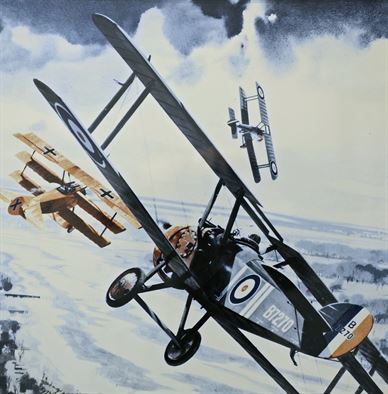 Painting Red Baron in hot pursuit of ‘Wop’ May’s Sopwith with Capt. Brown attacking from above. According to his combat report Brown attacked Richthofen from above. The bullet path entered from below.

The postmortem examinations revealed entrance and exit wounds from a bullet which must have entered the body from the right, from the side, from behind and from below the body as it was sitting in the cockpit. Such a track means that the bullet would have passed through Richthofen’s heart. Although Captain Brown did approach from Richthofen’s right, it is difficult to see how, firing as he did from above, he could have inflicted such a wound unless Richthofen was steeply banking his triplane at the time that he was shot. For what it is worth, the newspaper article in the Chicago ‘Sunday Tribune’, attributed to Captain Brown, did not mention such a bank. In this article Brown referred to Richthofen looking back at him when Brown fired at him and a steep bank therefore seems most unlikely.
Be that as it may, there is ample evidence from eye witnesses that Richthofen continued to pursue Lieutenant May along the Somme valley for about a minute, firing his gun and concentrating on his target. This would have been impossible if Richthofen had been shot through the heart by Brown.

2. He was shot by Gunner Robert Buie. 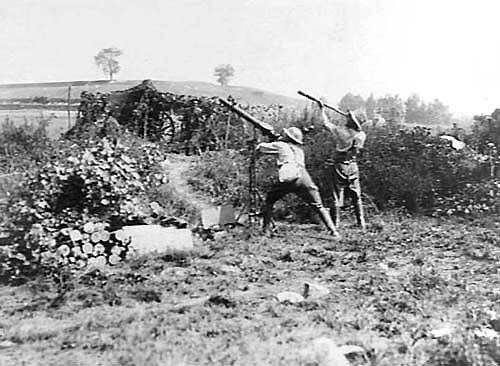 Again the track of the bullet makes it very unlikely that Buie could have shot Richthofen. From the statement attributed to Buie by Titler, Buie was firing when the triplane: “was bearing frontal and just a little to the right of me” and he could not have inflicted the wound that entered the body from behind. Buie stated: ‘Still Richthofen came on firing at Lieutenant May with both guns blazing. Then just before my last shots finished at a range of 40 yards Richthofen’s guns stopped abruptly…” Therefore at no time did Buie fire at Richthofen from behind.

Map showing the position of Buie and Evans firing to the front Richthofen’s triplane. of Source: The Death of Manfred von Richthofen: Who fired the fatal shot?

3. He was shot by Sergeant Popkin. 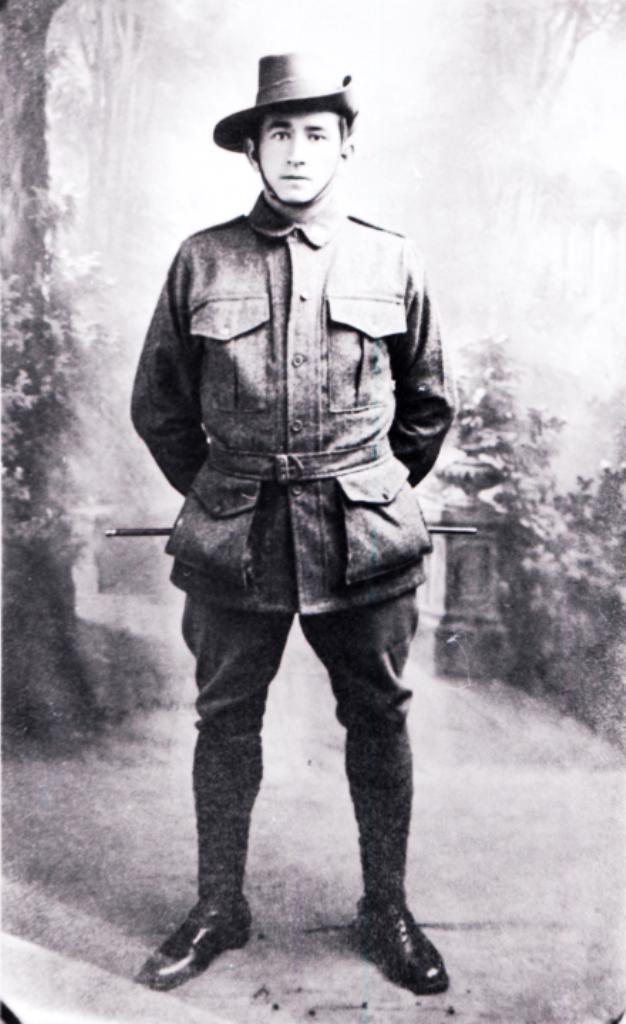 Bean and Carisella both came to this conclusion and this is supported by abundant eye witness evidence and by the track of the bullet Popkin first fired when Richthofen was approaching him from the Somme valley but he failed to stop Richthofen. After coming under fire from Buie and Gunner Evans, at the Lewis gun emplacement, the German aeroplane turned away from the gunfire and it was then, when the triplane was flying away from Popkin, that he opened fire with his Vickers gun for the second time.1 Popkin continued to fire while the triplane completed the turn, and actually flew towards the Vickers gun, but there is no doubt that Popkin could have inflicted a bullet wound that entered Richthofen from below, from the side and slightly behind, just as was found at the postmortem examination. Neither Captain Brown nor Gunner Buie could have inflicted such a wound and it is therefore more probable than not that it was indeed Popkin who fired the fatal shot. 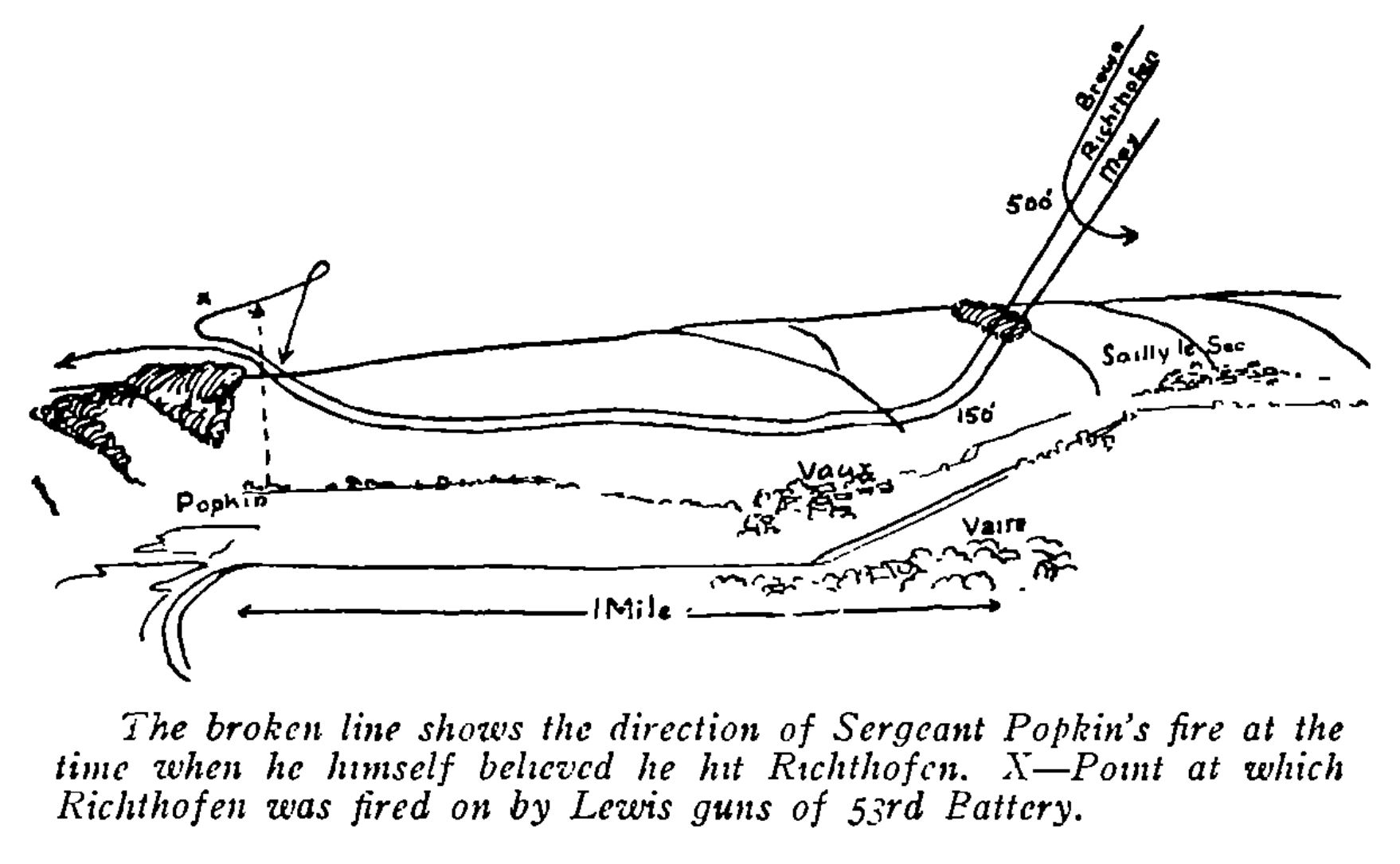 Map showing position of Popkin in relation to MvR’s aeroplane. Source: Bean’s First World War Official Histories
Volume V – The Australian Imperial Force in France during the Main German Offensive, 1918 (8th edition, 1941) Appendix 4 – The Death of Richthofen Popkin latter wrote to Bean: ‘The planes would be travelling in a North East direction straight towards my gun position. I opened fire immediately the British plane left my gun sights and followed the fritz around. He would be perhaps 100 to 120 yards in front of me when I opened fire and about 200 to 400 feet in the air. He would be below the top of the ridge which is about 500 to 600 feet high. I opened fire the second time at the peak of his turn marked X. I don’t think that I was firing so long the second time as the first. I would be firing at him the second time while he was travelling the line between the two crosses’ Source: Miller “The Death of Manfred von Richthofen: Who fired the fatal shot?

I say “more probable than not” because it is impossible to exclude the fourth possibility.

4. Richthofen was shot by an unknown Australian soldier who fired his rifle at the triplane as it flew over him and who scored a lucky hit.

This can never be disproved as the .303 rifle bullet was used by the Lee-Enfield Service rifle as well as the Lewis gun and the Vickers machine gun.
All that we can be sure of is that the entry and exit wounds on von Richthofen’s body meant that the bullet passed through the heart, or great vessels, and he could not have remained conscious for more than about thirty seconds after being hit. The fatal bullet had therefore to have been fired at von Richthofen at the end of the pursuit and this is likely to have been at the time when the triplane was observed to turn away from the hill where the Lewis gun batteries were situated. 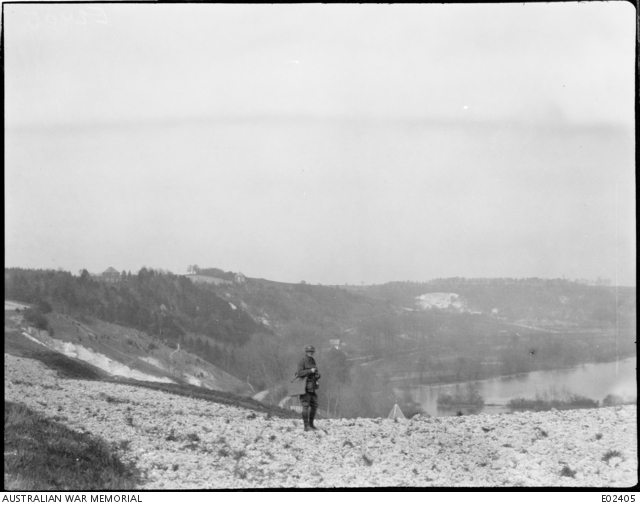 A view of the Somme Valley above Corbie. It was while flying low over these trees that von Richthofen was killed in front of the clearing on the right. Lieutenant Will Dyson, the Australian Official Artist is standing in the foreground. On his left is the Chateau occupied as a dressing station in April 1918. Source: AWM E02405

In summary: Popkin or a lucky shot.

The Official post mortem examination report is, in all probability, flawed and it is most likely that the bullet track was along a line joining the entrance and exit wounds. In other words the bullet came from behind, below and lateral to von Richthofen. There is little doubt that the bullet penetrated his heart and was fatal. Neither Captain Brown nor Gunner Buie could have inflicted such a wound.
The only known gunner that could have done so was Sergeant Popkin when he opened fire for the second time when Richthofen was turning away from him. Richthofen then lost control of his aeroplane and crashed, he was dead when his aeroplane hit the ground.
From the evidence of the postmortem examination and from eyewitnesses it was therefore most probably Sergeant Popkin who fired the fatal shot, although a lucky shot from an unknown soldier firing his rifle can not be excluded.

Dr Millers findings echo Red Baron enthusiast and historian P.J. Carisella’s exhaustive research in the 1960’s. Carisella and Ryan concluded rather graphically about the catastrophic nature of the injury: 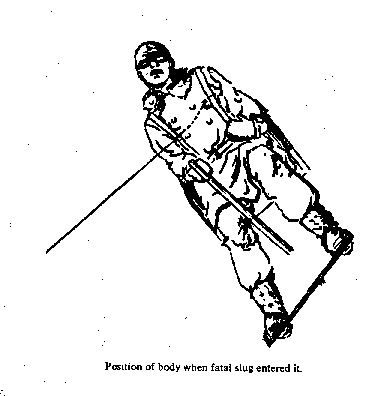 Illustration of the the angle and path of the fatal shot.

…the effects of the wound must have been violent and noticeable immediately. The machine-gun bullet, entering on the right side, below the armpit at the ninth rib, and passing through his chest cavity, must have—at the very least—punctured both lungs before exiting…Even if the big slug missed the heart or the aorta, it caused massive internal bleeding… Richthofen’s lungs must have become flooded with blood that rose through his trachea to his mouth, inevitably drowning him…Other pronounced reactions, he said, would have included: gasping for air, uncontrollable choking, and rapid and sharp clenching of his arms…the machine-gun bullet wound in the chest cavity resulted in an immediate response to the nervous system. No matter how intent Richthofen was on flying and trying to shoot down an Allied aircraft, his concentration would have been instantly interrupted…

Therefore the time window between being shot and hitting the ground would have been much less than 60 seconds. There is no way Brown had hit him more than a few minutes previous to this, and Richthofen had continued to engage in an extended chase of Roy Brown along the Somme, dodging local villages and tree-tops, up a steep embankment, before crash landing his aeroplane in a field. 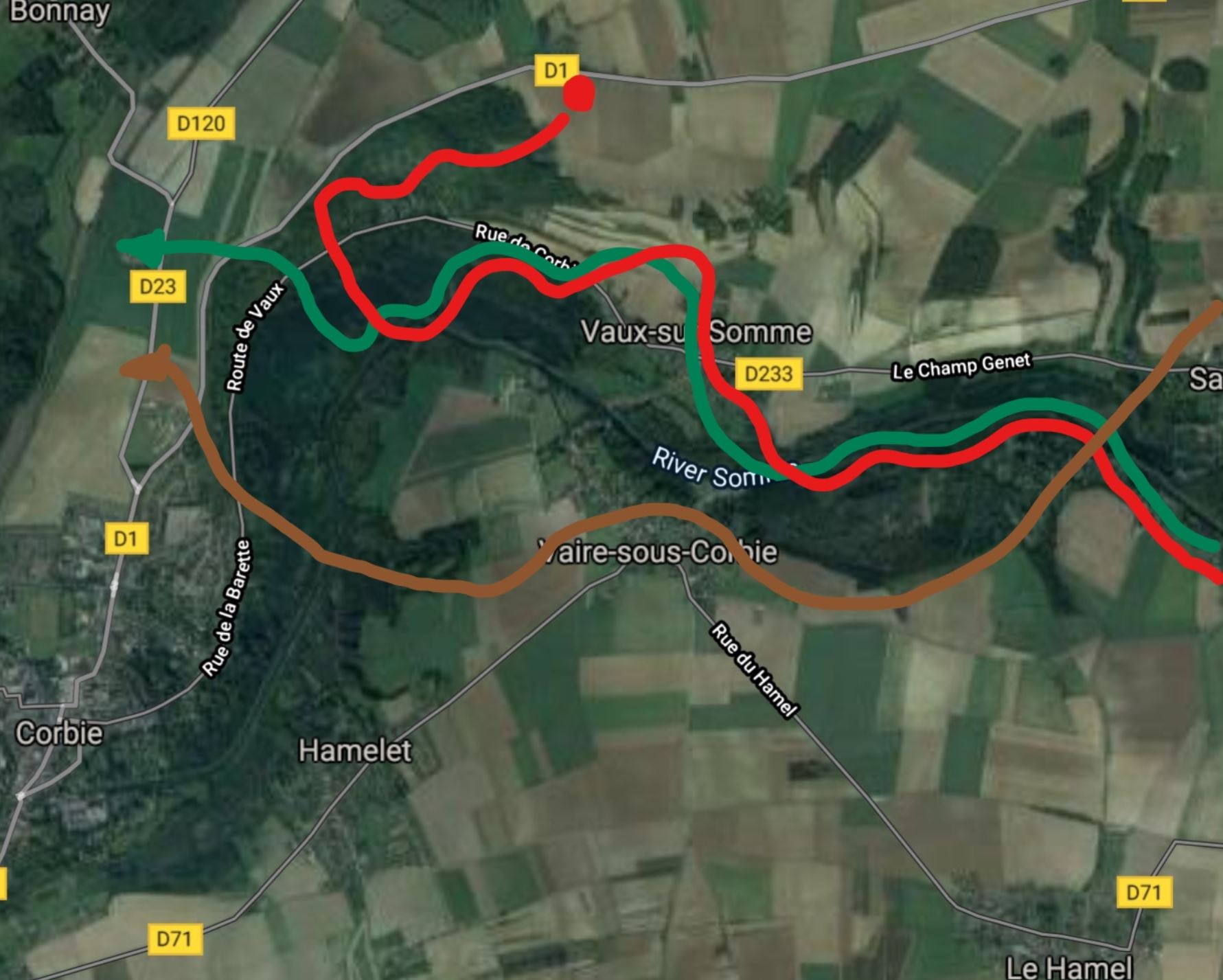 Recreation based on Norman Franks and Alan Bennett’s 3D map p 40-41. The green line represents May’s approximate flight path with MvR on his tail until the latter climbed the ridge defended by Australian troops. MvR banked right towards his lines before being mortally wounded by ground fire. Brown’s flight is brown and shows him attacking MvR from the right before circling back. 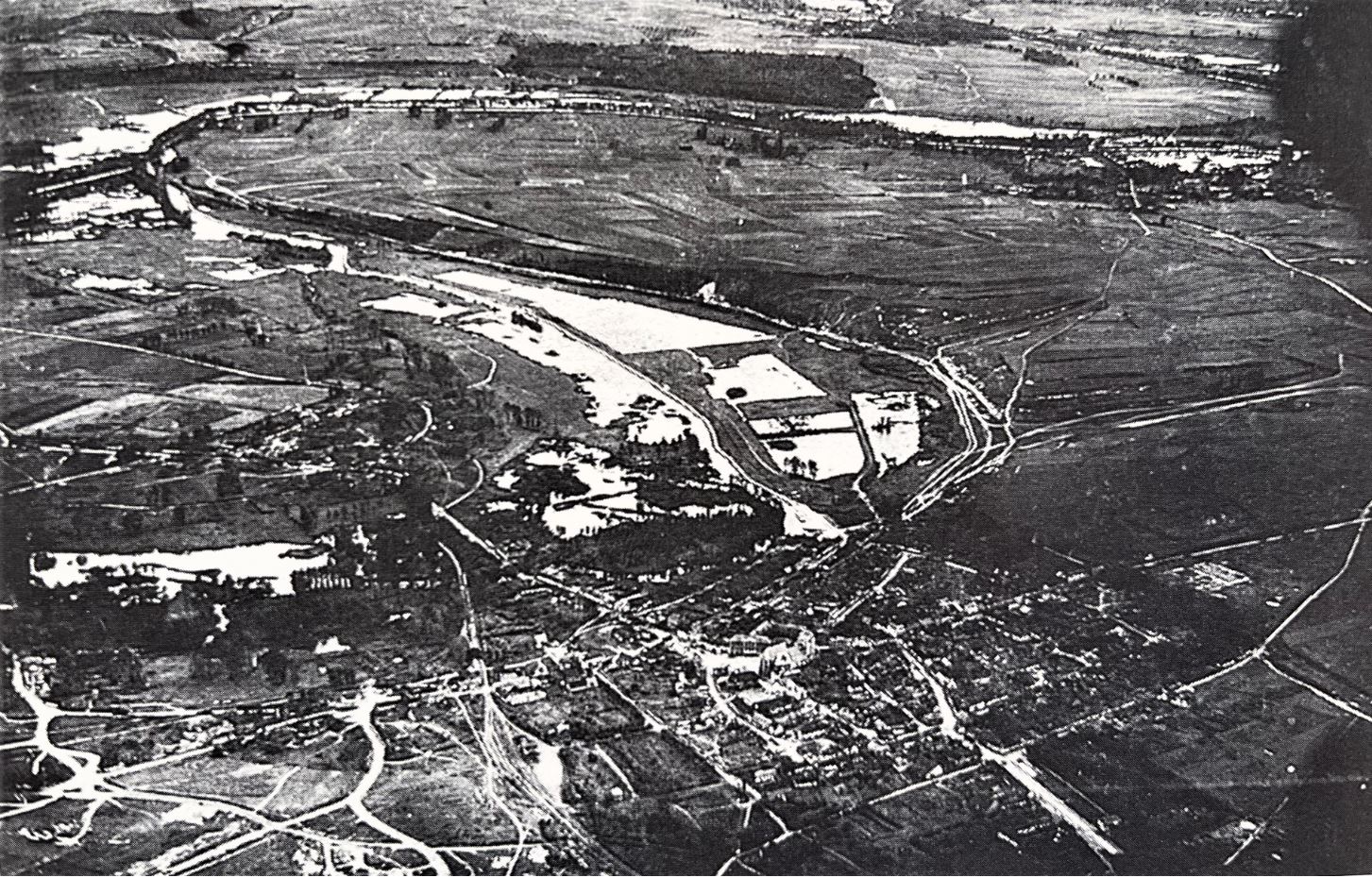 An aerial view of the flooded Somme.

Although the various authors have drawn different conclusions about who was responsible for Richthofen’s death, it is apparent that all previous accounts of the postmortem examinations made on Manfred von Richthofen have been taken from Bean’s account in Volume V of his Official History. It must be emphasised that Bean did not quote the reports in their entirety but left out some of the original text of the reports. 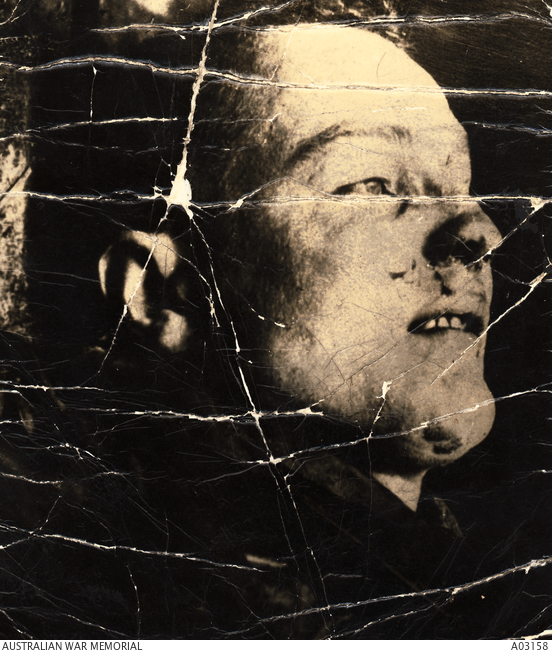 The original complete reports are in the Richthofen section of the Bean Papers (the Bean Papers) held in the research section of the Australian War Memorial (AWM) in Canberra2 and a consideration of these throws important new light on the controversy. There is also an unpublished letter from Popkin to Bean in the papers, clarifying an original newspaper report about Popkin that has been used by Titler and Carisella and Ryan in their books and by Markham in his article.

In addition to The Death of Manfred von Richthofen: Who fired the fatal shot? Dr Miller has also written other articles, including one on the Sydney vs Emden battle

Franks, Norman L. R and Bennett, Alan, 1929 The Red Baron’s last flight: an in-depth investigation into what really happened on the day von Richthofen was shot down. Grub Street, London, 2006.

2 Popkin’s letter to Bean in the Bean Papers. 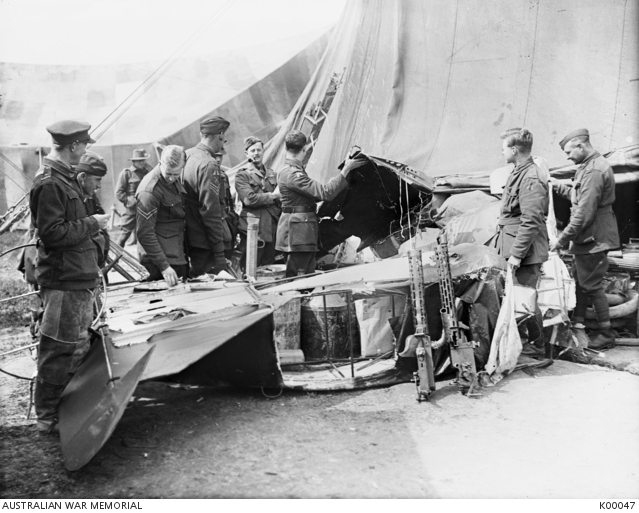 Lt E.C Banks of 3 Sqn remembered ‘…while the (first) autopsy was in progress in the hangar, a number of busy Australians, probably about twenty, were working on Richthofen’s plane and it rapidly assumed the appearance of a skeleton. Source: AWM K00047

Today is the 103rd anniversary of Manfred’s death.
Died 21 April 1918.
I ordered a copy of the best book on the Baron, ‘The Red Knight of Germany’ Floyd Gibbons, published 1927, it was published in English, it was published earlier in German, it is based on the Baron’s own notes.
I ordered the book on Good Friday from California, I am in Australia; at the time I did not know the date of Manfred’s death; the book arrived this morning, I have checked daily so there was no error, as I sat here reading of his death I was notified by the Post Office of the books arrival.
Make what you want of this eerie coincidence.