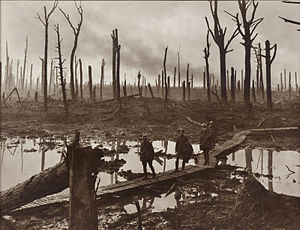 Australian gunners on a duckboard track in Château Wood near Hooge, 29 October 1917. Photo by Frank Hurley

W J A “Allan” Allsop a clerk from Brierley Street, Mosman, served as a stretcher bearer with the 8th Australian Field Ambulance. His diary entry for the 29/09/2017 describes the state of the town of Ypres which he was passing through.

Ypres is a pitiful sight – smashed to the ground. It is one of those old fashioned towns surrounded by a wall and ditch, with gateways leading out on to the main roads. In peace time Ypres must have been a beautiful place, but now it is much more knocked about than Bapaume. There isn’t a building with a roof on it, and there are only a few walls of buildings left. It reminds one of acres of scattered bricks. The one time Church is now practically wiped out. Over the horror of the battlefield, the air war raged. One pilot flying high above was Lt. R.S. Phelan.

His enlistment records show he was a 22 y.o. undergraduate, living in Mosman.

Phelan became a Flying Officer (on 16/04/17) with 22 Squadron in France. 22 Sqn. had begun replacing its outdated FE2’s with Bristol F.2b’s by the time of his arrival. Despite the upgrade, Phelan and his observer were shot down in their ‘Brisfit’ A7201 on 17 August over Passchendaele. They fell to the guns of Leutnant Hans Georg van der Osten of Jasta 11 (it was the unit’s 200th claim1). Phelan’s observer Lt. J. L. Macfarlane was killed.

Phelan was captured wounded, at Lille, and became a P.O.W. He was interned at Holzminden and was repatriated back to England on 14/12/1918. Ronald Starr Phelan married Emily Frances Howard, of Newhaven, Surrey, in England on 30 May 1919. He died on the 1st November 1953.

Paul Ham’s positively reviewed Passchendaele: Requiem for doomed youth re-paints a picture of the politics, pointlessness and tragedy of this battle.

A very readable and honest 1st hand account of the Ypres experience can be found in Lieutenant Joe Maxwell’s Hell’s Bells and Mademoiselles. Joe Maxwell, VC, earned a Distinguished Conduct Medal fighting with the 18th Battalion, 5th Div. A.I.F for his brave acts.

George Franki’s Their Name Liveth for Evermore, reveals that about 15% of Mosman’s dead in the Great War were at Passchendaele. The impact on the local community of this catastrophic event is remembered in the following roll call:

A.I.F. Volunteers associated with the local area who died during the Battle of Passchendaele.

Individual records can found in the People section of Doing our Bit, Mosman 1914-18 They include:

BLAKEMAN, Percival Albert 29; KIA 25/10/1917; 1st Pioneer Battalion; Passchendaele. Plumber. “Arcadia” Edward St, North Sydney. On 17 September 1920, Blakeman’s mother in a letter to Army Records wrote: “My late husband, the father of our son the late 3009 Sgt P A Blakeman 1st Pioneer Battalion is dead, he died of a broken heart through the loss of our son.”

CREW, Joseph Edward 34; KIA 20/10/1917; 2nd Field Artillery Brigade; Passchendaele. Permanent Soldier. Name added to Mosman War Memorial in 2008. He went to France in July 1915 with an Ammuntion Park of the AIF, the first unit of the AIF to land in France. Brother of Eric John Crew, 1st Australian General Hospital.
“…very popular with all the men of the battery.”

FORSYTH, Kenneth McQuarie served as Forsyth, Harry Kenneth 26; DOW 16/10/1917; 57th Battalion
Tramway guard, BHP. Mother Charlotte, “Avoca” 88 Avenue Road, Mosman.
“I heard him say ‘I’m alright’ but he was worse than he thought for I know he
died of wounds.”

HOLTSBAUM, Thomas Richard 21; DOW 4/10/1917; 33rd Battalion; Passchendaele. Farmer. Parents Frederick & Annie 90 Belmont Road, Mosman.Brother, William 17th Battalion.
“He was a very big fellow, dark.” – “He was very popular in the Battalion and
always will do anything for anybody.”

RITCHIE, Eric Cecil Howard 27; KIA 20/9/1917; 3rd Battalion; Passchendaele. Bank clerk, Bank of Australasia. “Demora” Clanalpine Street, Mosman. Served as sergeant on Gallipoli. Commissioned three weeks before his death. “Lieutenant Ritchie was looked upon as one of the finest men in the army.”