Killed in action at Gallipoli on 19 May 1915 during a sustained attack on Anzac lines during which three Turkish soldiers entered the 2nd Battalion's lines. Harold Barton shot one of them but was immediately killed by the others who in turn were killed (Commander's Diary, 2nd Battalion, May 1915, folio 13). For some reason his records show his date of death as 23 May 1915.

His mother lived at 68 Muston Street, Mosman, while his wife lived at the Captain Cook Hotel, Botany, which was owned by her mother.  [JSB] 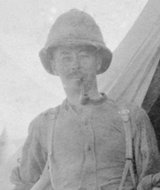