GARLING, FREDERICK HUBERT, M.M., Sergt., Canadian Expeditionary Force, s. of Clarence William Henry Garling, of 107, Spencer Road, Mosman, by his wife, Mary; b. Camden, New South Wales, 8 Aug. 1874; left Australia in 1900 for San Francisco, and finally settled at Vancouver as an Insurance Agent ; enlisted ; served with the Expeditionary Force in France, and was killed in action at Vimy Ridge, 5-7 May, 1917. He was awarded the Military Medal for gallant and distinguished service in the field. He m. at Vancouver, Gertrude, dau. of (-) Souden, and had four children: Hubert; Mary; Doris, and Joyce.

SERGT. FREDERICK HERBERT GARLING, who was killed in action during the heavy fighting north and east of Arras on May 7, had been twice recommended for his gallant conduct. He went overseas with a Vancouver battalion nearly two years ago as a private and for his bravery in the storming of Vimy Ridge was recommended for the Military Medal and promoted to platoon sergeant, being later again recommended for gallant conduct by the officer commanding the 10th Infantry Brigade. He was the son of C. W. H. Garling, manager of the Bank of New South Wales, Sydney, and came to Vancouver in 1903, where he entered the insurance business. He had three brothers at the front, one of whom, Lieut. L. Garling, was recommended for the Military Medal. His widow, a cousin of Admiral Sims of the U.S. navy, reside on Ninth street east, North Vancouver. 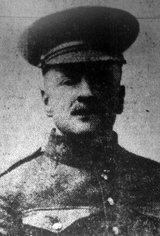