Major 8th Light Horse Regiment
Enlisted Melbourne 21.9.1914. Killed in action on 7 August 1915 during the charge on Turk trenches at The Nek. During the charge he took cover in a depression about 10 yards from the Turk trenches. When he raised his head to peer up a Turk sniper shot him in the head, killing him instantly. During the night Troopers Lionel Simpson and 'Ginty' McGuinness went out into No Man's Land to recover Redford's body and identity discs to confirm his death. Buried at Walker's Ridge Cemetery (II.C.9). Born at Warrnambool. Son of Thomas and Isabel Redford of Warrnambool. He married Ruth Cameron of Sydney just before the regiment sailed for Egypt at the end of February 1915. His widow later lived at "Kaikora", 49 Middlehead Rd., Mosman, NSW. Merchant. Aged 34. Served in the Citizen Forces (he was a lieutenant with the 20th LHR militia at Warrnambool). He played for Warrnambool Cricket Club. On Warrnambool RSL Roll of Honor.
Source: Massey, Graeme 2004, Gallipoli heroes : a tribute to the men from Western Victoria who gave their lives for their country, Warracknabeal Secondary College History Dept, [Warracknabeal, Vic.]

"Our gallant Major whilst lying facing the enemy's trench (10 yards away) in the front of his men received a bullet through his brain as he raised his head slightly to observe. He died with a soft sigh and laid his head on his hands as if tired. A braver and more honourable man never donned uniform. The love not only by his Squadron (I might well say adored), but the all the regiment, he created respect everywhere."
Source: AWM PR85/064 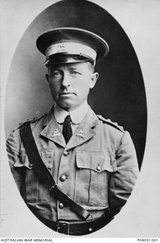