A contemporary newspaper report describes him as a near relative of Sir Douglas Haig, Commander-in-Chief of the British Army in France.

His mother Gertrude Philp died 1924 at a private hospital in Mosman. [Anon]

He was in London at the outbreak of the war. He joined the British Army and received a commission in the Royal Field Artillery. He was killed in action on the Somme. [JSB] 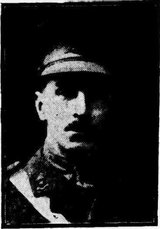