Reginald Cook was born in Mosman; his parents were William and Thriscilla Cook. Educated at Scots College, Sydney, he was a wool merchant working for his father when he enlisted on 8/6/1915.

He was killed 26 days after joining his battalion on Gallipoli. The 1st Battalion was evacuated in December 1915.

A comrade wrote of Cook's death: Cook was killed at half past six on the 26th of November at Larges Post. Detailed with three others for patrol duty and whilst climbing out over the trench was shot right through the head by a Turkish sniper who must have gained the knowledge in some way that the patrol was to start from this point and lay in waiting. Death was instantaneous.

Cook's mother, Thrisclla, died in 1932. In her will she left 100 pounds to the Soldiers' Memorial Hall, Mosman in memory of her son.

Cook is buried in Shell Green Cemetery, Gallipoli. A few days before the evacuation of the AIF from Gallipoli on 17/12/1915, a cricket match was held on Shell Green to deceive the Turks, intending to show that evacuation was not intended.

It is poignant that a cricketer from Mosman is buried where this match was played. 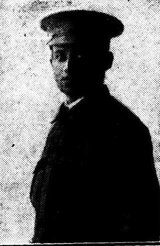