Permanent member of the Australian Military Forces, serving with the Royal Australian Engineers at Chowder Bay, prior to enlisting in the AIF on 2 January 1918.

He joined the 1st Company Field Engineers as Company Sergeant Major on 4 August 1918 and was wounded in action eight days later, on 12 August, with gun shot wounds to his arm and face.  He returned to his unit on 2 September.

He broke a bone in his foot on 2 November 1918 and was evacuated to England for treatment. 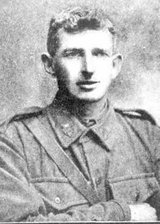