* For conspicuous gallantry and devotion to duty when in charge of the evacuation of wounded from the forward area. He led a relief of stretcher-bearers over a track knee-deep in mud, and at times over his waist in water. Another time he led a party through an intense barrage, thus relieving a temporary congestion of the wounded. He had very little rest during the whole four days. 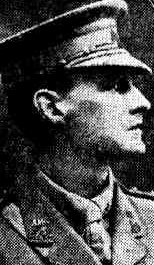