The recommendation for awarding the Distinguished Conduct Meal was as follows:

In the Hindenburg Line, near Bullecourt, France, on 4th-5th May 1917.  During an enemy advance and bombing attack Sergeant Bass supervised three Lewis Gun teams and then organised and maintained the supply of bombs to our bombing party.  He carried grenades, under very heavy shell fire, over 500 yards of trench and set a magnificent example to the men around him.

The recommendation for awarding the Military Cross was as follows:

For conspicuous gallantry and devotion to duty during the attack near Hargicourt on the 18th Sept., 1918.  On account of thick fog and rain his platoon became disorganised but he pushed forward with only two or three men and captured the enemy machine guns and about 40 prisoners.  Later he displayed great energy in reorganising his platoon and advancing to the final objective under heavy fire.  His example and leadership were an example to all with whom he came in contact and his bravery and display of initiative were of the highest order. 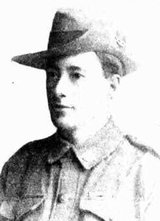