Killed in the Ypres salient by German shellfire when repairing a captured German strongpoint.

In 1929 his mother Edith Cecilia Arnold, then at 6 Gouldsbury Street, Mosman, completed the particulars for the Roll of Honour in the Australian War Memorial. She said he'd been to Mosman Public School and Sydney Technical College, and, prior to enlisting in the AIF, served five years in the 37th Fortress Company (engineers).

She said he was present at the battles of Fleurbaix (now better known as Fromelles), Somme (winter of 1916-1917), Bullecourt, Polygon Wood, and Paschendaele. He was promoted, she says, for good work and bravery at Polygon Wood. 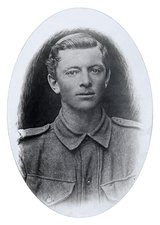