Private George Harman Burke, second son of Mr. Jas. A. Burke, Hailshot, Neutral Bay, is reported missing. He joined the 18th Battalion on his 18th birthday, June 3, and left for Egypt on June 25. After a couple of weeks in the latter place, he went to the front, and has been reportod missing since the 18th's famous charge of Hill 60 on August 20, or less than 11 weeks from the day he went into Liverpool camp. Private Burke was educated at St. Aloysius' College, Fort-street, and Sydney Grammar School, and at the time of his enlistment was an evening student at the Sydney University. As an athlete be was full-back for Mosman First Grade Rugby Union team, held Life-saving Society's swimming certificate, and was one of the best shots at the Grammar School. He held badges for drill at that school and played with the school's football and cricket teams. His elder brother, Tom J. Burke, was one of the first volunteers from North Sydney to join the Rabaul contingent, three days after the declaration of war. Private Burke has 14 relations with Queensland battalions in Gallipoli, and several in Flanders.
- The Sydney Morning Herald, 8 October 1915 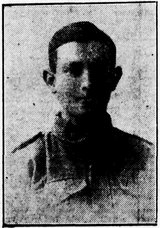