George Lester served with the 18th Battalion, 5th Brigade and was initially reported as missing in action on 3 May 1917, the first day of the second Battle of Bullecourt. His brother, 5732 Arthur George Lester, who was fighting with the 17th Battalion, saw him being carried wounded from the field. At the time there was German shelling of the area where the wounded were being evacuated. A Court of Inquiry found on 4 December 1917 that he had been killed in action. His body has not been located.  He is commemorated at the Villers-Brettoneux Memorial.

George Lester was born in Poplar, London on 5 May 1884, and was the son of George Lester and Mary Ann Munn. He joined the Essex Regiment of the British Army on 24 November 1902 and served three years in the UK and Malta before transferring to the Army Reserve. He migrated to New South Wales in June 1909. He married Eleanor May Boyce (nee Weston), a divorcee with two children, on 23 August 1913. They had one child, George Joshua Lester born on 16 May 1914.

He returned to London and resumed active service in the British Army on 13 August 1915 before being allotted to the 3rd Battalion, Northampton Regiment on 29 September 1915. He was discharged on 27 January 1916 without serving overseas. He returned to Australia in March 1916 and enlisted in the AIF on 10 May 1916. He left Sydney on 7 October 1916 and after further training with the 5th Training Battalion in England, joined the 18th Battalion in France on 5 February 1917.

At the time of his enlistment, his address was West Street, Brookvale and his occupation was as a painter. Eleanor May subsequently lived at 120 Cowles Road and then 46 Spencer Road, Mosman before moving to Lest We Forget, Quakers Road, Mosman in early 1919. The latter was one of four houses specially built for war widows and invalid ex-servicemen by the Mosman Volunteer Workers Association with the work being done by members of the Mosman and Neutral Bay Rifle Club. 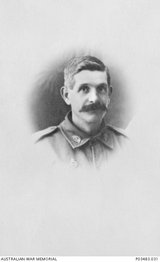