Reginald Cannon was born in Stanmore, Sydney. His parents were George and Eleanor Cannon who lived at Tynwald 26 [should be 76] Belmont Road, Mosman. George Cannon was on the staff of the Legislative Assembly of the Parliament of NSW.

Educated at Mosman Superior Public School and a member of the congregation of St. Luke's Church, Mosman, Cannon was a clerk when he enlisted on 20/6/1915.

He was originally posted to the 30th Battalion, 8th Brigade, 5th Division then was transferred to the 8th Machine Gun Company supporting the 8th Brigade. The Company was equipped with Vickers machine guns.

He embarked from Sydney for overseas service on 9/11/1915 in the transport Beltana. Cannon survived the terrible Battle of Fromelles, 19-20 July 1916, when the 5th Division suffered over 5000 casualties in a night including nearly 2000 dead...

Cannon also survived Flers late in 1916 but was killed at the end of the Passchendaele campaign.

An 'In Memoriam' notice for him which appeared in the Sydney Morning Herald of 8/1/1918 concluded: Loved by all. A good life nobly spent.

'Reg Cannon' is mentioned several times in Allan Allsop's diaries, and Allsop hears of his death on 7 December 1917.

Reginald Cannon is also commemorated on the Concord War Memorial in Queen Elizabeth Park and the Breakfast Point War Memorial that lists the names of those employees of the Australian Gaslight Company who perished in World War One. 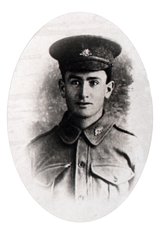