Thomas Godart was promoted to Corporal and later reported as wounded and then missing. A court of inquiry decided he died sometime between 4th and 7th May 1917 as he made his way to a dressing station at the battle of Bullecourt.

His father, of 40 Finsbury Park Rd, London, filled out the Roll of Honour circular and gave Thomas's occupation as estate agent and surveyor. 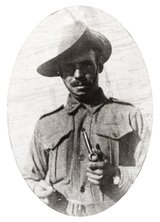