Wounded and taken prisoner of war at Bapaume on 4 November 1916.  He made two unsuccessful escape attempts but, after feigning epilepsy, he was repatriated from his last German prison camp by way of Holland and arrived in England on 23 February 1918.  He was awarded the Military Medal "in recognition of gallant conduct and determination displayed in escaping, or attempting to escape from captivity".  [JSB] 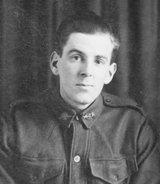