He absented himself without leave for 38 hours in April 1918 and was court martialled in May 1918 for being absent "in the field".  He was sentenced to six months detention.  His sentence was suspended after five months' detention.

His battalion was not in action between the time of his return and the Armistice. 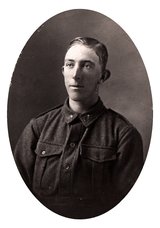