Killed in action on 25 October 1916 while his battalion was defending the front line at Le Barque (Ligny-Thilloy, Pas-de-Calais, France). 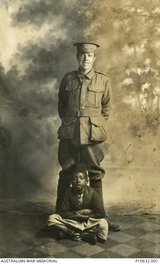