Died on service at Messina, Sicily from pneumonia.

The Next of Kin Plaque issued to Reginald William Bartlett Farmer’s mother, Clara, is in the Australian War Memorial Collection as well as the Mothers and Widows Badge issued to Clara and the RAN Female Relatives Badge issued to either Clara or his sister, Kathleen.

The AWM Collection information for these items includes the following summary of his life and military service.

Born in Sydney on 27 June 1888, Reginald William Bartlett Farmer lost his father at the age of seven and moved with his widowed mother and siblings to England, where he was educated in Devon before securing a scholarship to Bristol Grammar School. In about 1904 he entered the merchant navy as an apprentice and joined the sailing ship 'Invergarry' on a voyage to Sydney. From there he transferred to steamers, signing on with the Union Steamship Company of New Zealand, which operated passenger ships. His mother, brother and sister returned to live in Sydney in 1908.

Farmer was 26 years old, serving in the 7,000 ton SS Makura, and already an experienced officer when he was appointed a sub-lieutenant in the Royal Australian Naval Reserve on 15 December 1915. After training at HMAS Cerberus in Victoria, he was appointed navigator of the newly commissioned River Class torpedo boat destroyer HMAS Torrens in June 1916. Torrens began her seagoing service as part of the British Far East Patrol, operating out of Singapore and Sandakan in Borneo until May 1917. In July 1917 the ship became part of the Australian Destroyer Flotilla and in August arrived in the Mediterranean, tasked with escorting merchant ships to protect them against enemy submarine attack.

From October 1917 Torrens was based at Brindisi in Italy helping to patrol the Strait of Otranto to prevent enemy submarines based in Austrian and Adriatic ports from reaching the open sea. This subsequently turned into a combined British and French fleet full scale blockade of the Adriatic Sea.

On 8 September 1918 Torrens was withdrawn to Messina in Sicily for a refit. On 1 October, while the ship was in dry dock, Farmer contracted what was later diagnosed by Italian doctors as the 'Spanish' influenza. Efforts to treat his symptoms aboard the Torrens were unavailing and his temperature rose to 104 degrees Fahrenheit. On 6 October he was taken ashore to the Military Hospital for treatment. Delirium set in and he died there of pneumonia on 9 October. He is buried in the Messina Town Cemetery.

Farmer's mother, Clara, lost both her sons during the war. Her other son, Aubrey, had earlier been killed at Gallipoli, on 29 April 1915, while serving with 3 Battalion, AIF. This commemorative plaque was issued to Clara Farmer in the early 1920s.  [JSB] 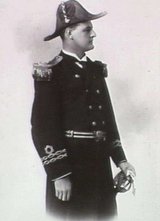