Enlisted in September 1914 at the age of 15 as Charles Jackson.  He landed with the 1st Battalion at Gallipoli on 25 April 1915 and was wounded soon afterwards.  He returned to Australia in August 1915 and was discharged from the AIF in April 1916 after his parents notified the Army that he was under age.

He reenlisted in January 1917 under his correct name and returned overseas to serve with the 45th Battalion.  He was wounded in action in France in July 1918.  [JSB] 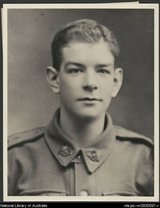