"I saw in orders the other night the sad fate of Claud Boone my old Rowing Club skipper. He had just joined his Battalion as a Second Lieut. He was one of the finest chaps it has been my lot to meet. I feel very much for his home folk."
Stanley Hayne, in his diary, 5 August 1916. 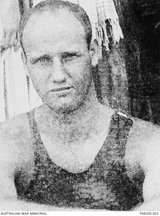