"From the "Mosman Resident," of Saturday, 24th March last, we take the following:-

Mr. and Mrs. J. E. Bishop, of "Narbethong," Killarney-street, Mosman (N.S.W), have been advised by cable that their eldest son, Lieutenant Ernest Eldred Bishop, has been killed in France. No date was given. The record simply states: "Killed in action while saving others." It is a fine tribute. It is not given to any man to die in a better manner, nor in a better place.

Lieutenant Bishop was formerly Quarter-Master Sergeant of the 4th Garrison Artillery, at Middle Head. Not being permitted to enlist he went to England, arriving there in September, 1915. He presented his credentials to Sir George Reid, then High Commissioner, who sent them on to the War Office. He was almost immediately granted a commission as 2nd Lieutenant in the Royal Garrison Artillery, and sent to Dover for train ing. He went to Belgium about fourteen months ago with a Trench Mortar Battery.

In July last he was sent to Armentieres in France on special duty with Australian troops. He found himself among Mosman lads, including his old chums from the Mosman Methodist Church, several of whom were wounded on the occasion. He has since remained in.France, excepting for a brief period of leave at Christmas.

About four months ago he became commander of a Trench Mortar Battery, and was authorised to put up his second star.

The late Lieutenant Bishop was 22 years of age, and was a grandson of Mrs. J. E. Bishop, of "Baarmutha," Bambra-road, Caulfield, and formerly of Newtown, Beechworth." 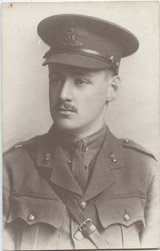