Wounded in action on 10 August 1916 at Pozieres with gun shot wounds to his right leg, abdomen and skull (compound fracture).  After treatment in England, he returned to Australia in April 1917 and was discharged from the AIF.

He suffered a stroke which caused his premature death on 11 January 1924.   [JSB] 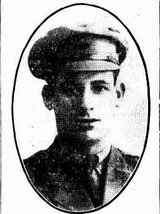