Enlisted in April 1916, at the age of 17 and 5 months by overstating his age by four years.

He and 62 other reinforcements joined the 53rd Battalion at Becourt, France, on 30 April 1917.  About five weeks later he went to hospital with influenza.  Soon after returning to his unit on 22 June, he was sent to the 5th Australian Divisional Base Depot for being "under (19 years of) age".  How this was ascertained is not apparent in his file.  Within a week, he was posted to the 2nd Australian General Hospital at Wimereux near Boulogne, France where he remained until he joined the 12th Field Ambulance in February 1918 "on attaining the age of 19" (which had in fact occurred four months earlier).  He served with that unit until his return to Australia.  [JSB] 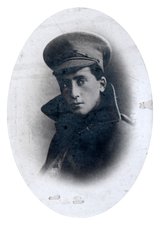