Thomas Vincent Goodman enlisted in the AIF in September 1915.  He was a carpenter and was taken on strength by the 5th Pioneer Battalion in Egypt.  The battalion landed at Marseilles, France on 25 June 1916.

He was wounded three times.  The first occasion was on 18 July 1916 when he was wounded in the right leg.  At the time his unit was at Sailly-sur-la-Lys, Pas-de-Calais.  He returned to the front line in November 1916.

He was again wounded on 9 February 1917 when his unit was at Waterlot Farm just north of Guillemont, Somme.  He received wounds to his upper extremities and fractured his clavicle.  He was again evacuated to England for treatment.  He again returned to the front line on 1 July 1917.

Just 15 days later he was wounded again when his unit was at Dickebusch, Flanders.  This time he received wounds to his face and left leg.  He remained in England after hospital treatment and did not return to the front until October 1918.

Both his parents were dead when he enlisted.  Although he had six siblings, he gave his future mother-in-law, Eveline May Wells (nee Griffiths) of Kirkoswald Avenue, Mosman, as his next of kin. 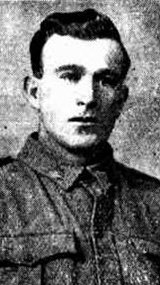