Parents Albert Langford and Mary Priscilla Stolz. Father Albert was employed on the clerical staff of the Sydney Morning Herald, a member of the Mosman Neutral Bay Rifle Club, and a founder and vice-president of the Mosman Musical Society.

Enlisted 12 July 1915, age 20 years and 10 months. Norman had been apprenticed as a photo engraver at the Sydney Morning Herald for 4 years, with a similar period of service with the 17th Infantry.  Address of his mother given as 50 Prince Street, Mosman.

Reccomendation for gallantry and devotion to duty during operations on 23 August 1918:

For two hours this N.C.O, despite heavy enemy machine gun fire, held on to a position in advance of our line, harrassing the enemy with his Lewis Gun and greatly assisted the advance in the exploitation stage of the attack.

Married Coral Mary Matthews in 1920, had 4 sons and 2 daughters. 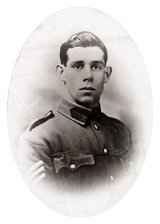