William Rollo Fincham (known as Rollo to his family and Bill to his Army mates) enlisted on 28th April 1916 at The Warren, Marrickville.  On 6th May, he was posted to the 5th Reinforcements, AIF.  He embarked on 14th September 1916 on HMAT Mashobra and spent 19 days of the voyage in the ship's hospital with mumps.  He disembarked at Plymouth on 2nd November and crossed to France on about 28th December 1916.

Serving on the Western Front with the 10th FAB, he would have been part of the major campaigns of Bullecourt, Messines, Ypres, Menin Road, Polygon Wood, Peronne, Dernancourt, Villers-Bretonneux, Hamel, Amiens and the Hindenburg Line.

Charles Bean wrote that on the Western Front the 4th Division earned itself a reputation for hard fighting, and that it had the "least polish" but the "most numerous war-scars" of all the Australian divisions.

Commenting on his war service, Rollo quoted the words of Major Sandford Morgan: "Weeks of utter monotony punctuated by minutes of hellish fear."

Rollo returned to Australia on HMAT Anchises.  He was discharged on 26th May 1919.

A collection of letters that Rollo wrote to his parents and sisters is now held by the Australian War Memorial.   Jonathan King used a number of extracts from these letters in his book "The Western Front Diaries".

On his return from war, Rollo finished his university studies, graduated BA, LLB and became a solicitor.  He did honorary work for Legacy over many years, serving as Honorary Secretary for 5 years 1937-42, and then as Legal Officer.

Rollo had two sisters, Eunice (known as Nici) and Audrey. In 1936 he married Edith Bulkeley who died in 1938.  He married Elizabeth Garsia in 1945 in Bathurst, NSW.  They had one daughter, Christina (now Christina Pender). 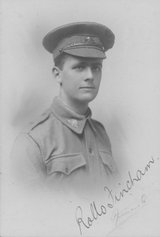