Lieut. G. Ferguson was born at Dubbo 28 years ago. He is a wool-classer, and for the last few years has resided with his parents, Mr. and Mrs. G. A. Ferguson, in Myagah-road, Mosman. He was a captain of the senior cadets there. He left Sydney as a lieutenant in Colonel Cox's 6th Light Horse Brigade, and it was for the leading of a party of these lighthorsemen in a demonstration against the Turks that Lieut. Ferguson was mentioned in despatches. A short time ago he had to leave the trenches for Malta and later Cairo owing to becoming ill. 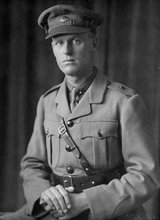