Enlisting 25th January, 1915, and sailing with battn. as corporal, 25th June, served from August until the Evacuation at Gallipoli, where commissioned in October. Crossing to France, fought at Pozieres, the Somme and elsewhere until early in 1917, when recalled to Salisbury Plain for special training with battn. reinforcements and at Officers School. Rejoining battn. in June, remained with it till it was disbanded in October, 1918, and joining 18th Battn. served until demobilisation. Promoted lieutenant, 30th June, 1916; captain, 22nd June, 1917. 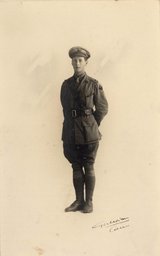