According to official documents Sterling Dando Carver enlisted on the 18/08/1915 (age 19 yrs, 1 mth.) He stated his usual occupation as that of a "Station hand"  and that he had previous experience as a senior cadet at North Sydney P(?) School. He embarked from Sydney on the H.M.A.T. "Hawkes Bay" on the 25th of October 1915.

As a "Trooper" n the 12th Light Horse Regiment 4th LH Brigade ( machine-gun Squadron) 7th Reinforcements  he saw service in Egypt (Suez) and Palestine (Gaza, Jerusalem and Beersheba.) He completed his service in Damascus, training at an army "Cookery School" before disembarking Suez on the 17/07/1919

His "Casualty form" lists various illnesses (including Dysentry and Malaria), misadventures* and  achievements (95% on the Lewis Gun) .

After the war he requested a copy of his discharge papers and medical records. 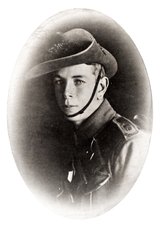