Wounded in action on 15 May 1917 during the Second Battle of Bullecourt when there was a German counter-attack on part of the captured Hindenburg Line near Riencourt being defended by his 54th Battalion.

A linotype operator with the Orange Leader prior to enlisting. 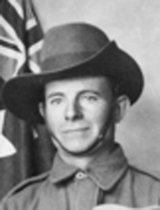