Wounded in action at Bellicourt on 30 September 1918 and died at the 53rd Casualty Clearance Station located at Tincourt on 2 October 1918.

"For conspicuous bravery in the attack on POLYGON WOOD on the 26th Sept. 1917.

Though wounded early in the attack he continued to lead his company and himself conducted the assault on the BUTTE  which constituted the objective of half of his company. Immediately the objective was reached he started to consolidate the position and did not leave the line until nine hours after he was wounded and the position made secure; and then only on the order of his Commanding Officer.

The courage and example of this officer contributed largely to the success of the attack."

He was subsequently recommended for a Bar to his Military Medal, which was not awarded.  His Commanding Officer's recommendation reads:

"This gallant Officer showed great personal bravery and excellent leadership during the operations near MORLANCOURT on 29/7/18.  During the advance he successfully led his Company throughout, and by his untiring energy and excellent organisation was able to consolidate on the final objective.

His company only sustained 6 casualties during the operation.

His unfailing cheerfulness and person courage was most inspiring to all ranks under his command." 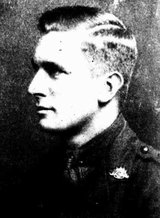