William Wright was born in Neutral Bay, son of William and Bertha Wright. On enlistment he lived at Yosemite 3 St Elmo Street, Mosman and was an accountant. He had been educated at Mosman Public School and Fort Street Boys High School.

The Sydney Morning Herald reported on 4/12/1915: Mr. and Mrs. W. M. Wright, of Yosemite, Elmo St., Mosman, gave a send-off at their residence to their eldest son, Mr. Will Wright, who is leaving for the front. Sixty guests were present, including five personal friends of Mr. Wright, who joined the Expeditionary Forces at the same time. He has been attached to the artillery.

He was serving with the 21st Field Artillery Brigade when he landed in France on 28/3/1916.

He is mentioned in Wilfred Allsop's diary: “In crossing Delville Wood, I met Clive Dunlop who told me that, of their gun crew of ten, six were killed, including Billy Wright.”

Delville Wood cemetery is east of the village on the southern side of the road from Longueval to Ginchy. 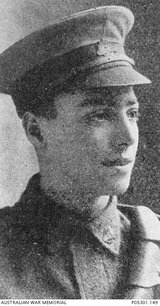