He was made a Companion of the Order of St Michael and St George, awarded the Distinguished Service Order with Bar and the Croix de Guerre, and mentioned in despatches five times.

During World War 2, he held a number of senior Army appointments in Australia, New Guinea and the Middle East, where he commanded the 6th Division.  He was appointed Australian High Commissioner to India in 1944.  [JSB]

The following biographies give more information about his service in World War 1:

Source:  Beyond 1914 - The University of Sydney and the Great War

Sir Iven Giffard Mackay (1882-1966), army officer, was born on 7 April 1882 at Grafton, New South Wales, eldest of three children of Isaac Mackay, a Presbyterian minister from Scotland, and his Canadian-born wife Emily Frances, née King. Iven was educated at Grafton Superior Public School, Newington College and the University of Sydney (B.A., 1904). He opened the batting for the university's cricket team, won Blues for Rugby Union football and rowing, and demonstrated in physics in his final year. After teaching (from 1905) at Sydney Church of England Grammar School (Shore), he returned to the university in 1910 as an assistant-lecturer in physics, 'glad to resume an academic career'.

At Newington, Mackay had been a sergeant in the school cadets. Although he showed no interest in the university regiment as an undergraduate, he became a lieutenant (1911) in the cadet corps instituted under the universal military training scheme. In July 1913 he transferred to the Militia as adjutant to the 26th Infantry Battalion, commanded by Lieutenant Colonel H. N. MacLaurin. During 1913-14 Mackay studied military science at the university. Promoted captain in June 1914, he volunteered for service with the Australian Imperial Force on the outbreak of World War I. On 27 August he was posted as adjutant to the 4th Battalion in MacLaurin's 1st Brigade. Eight days later, on 4 September, at St Philip's Anglican Church, Sydney, he married Marjorie Eveline, the 23-year-old daughter of John Meredith.

Prevented by a riding accident from embarking with his unit, Mackay sailed for Egypt in December with reinforcements for the 13th Battalion. In February 1915 he was posted back to the 4th, which landed at Gallipoli on 25 April. The duties of military transport officer prevented him from joining the battalion until 8 May 1915. Heavy casualties in the early fighting saw him promoted major in July and placed in command of a company in August. Wounded at Lone Pine that month, he was evacuated to Malta and thence to England. He was mentioned in dispatches for his work at Gallipoli. In February 1916 he rejoined the 4th Battalion in Egypt.

Mackay accompanied the unit to France in March. Next month he was promoted lieutenant colonel and given command. He led his battalion in action at Pozières (July) and Mouquet Farm (August). During the second battle of Bullecourt in May 1917, he held temporary command of the 1st Infantry Brigade. For his service in this period he was awarded the Distinguished Service Order (December 1916), a Bar to the D.S.O. (June 1917) and the French Croix de Guerre (1919); he was again mentioned in dispatches. He commanded the 1st Machine-Gun Battalion from March 1918. Promoted temporary brigadier-general, he took command of the 1st Infantry Brigade in June. He was appointed C.M.G. for his conduct at Hazebrouck (June-July) and on the Somme (August-September), and was mentioned in dispatches twice more.

Following the Armistice, Mackay entered the University of Cambridge to study physics. He returned home early in 1920 and lectured in that subject at the University of Sydney before accepting administrative posts: between 1922 and 1932 he was student adviser; from 1925 he was also faculty secretary.   . . . 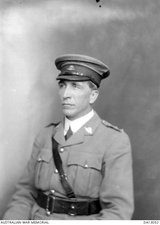