One of two flying aces with a Mosman connection.

Captain L. L. Richardson, M.C., has been killed in France. He was the youngest son of the late Mr. William Richardson, Bogolong, Grenfell, and Mrs. E. G. Richardson, Bereen, Barraba. He volunteered on the outbreak of the war at the age of l8, just after leaving the North Shore Church of England Grammar School, where he was captain of the football team, stroke of the eight, and captain of boxing. He was sergeant in the 6th Light Horse at Gallipoli, and was invalided to Malta, thence to England. He transferred into the Royal Flying Corps, and went to the Western front. Here, after   downing several German machines, he was severely wounded in both arms and thigh.   After recovering in England he returned to France, having been gazetted captain. Shortly afterwards he gained the Military Cross, for which he had once previously been recommended, only to meet his death a few days later while raiding the German lines and communications during the battle of Arras.
Sydney Morning Herald, 28 June 1917

"For conspicuous gallantry and devotion to duty. He attacked a formation of five hostile scouts, and brought two of them down. On another occasion, although himself wounded, he destroyed two hostile machines, and drove down, damaged, at least two others."
Supplement to the London Gazette, 11 May 1917 (30064/4592)

See the Doing our bit blog for more about this man. 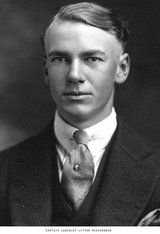