Enlisting 27th May, 1916, and sailing 7th October, joined unit at Ypres in October, 1917, after training at Larkhill and Grantham. Took part in all engagements till invalided from Locre in February, 1918, rejoining coy. in June and serving till demobilisation.

A school teacher who was a student at Sydney University at the time of his enlistment. It is not clear whether he had been a teacher at Mosman Preparatory School or became a member of the school's staff after the war.  He was living at 55 Bradley's Head Road, Mosman in 1922.  [JSB] 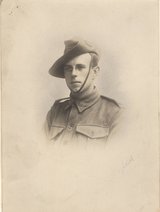