A French born wool buyer for Emile Lahousse of Tourcoing, France who had lived in Australia for about 20 years before returning to France in September 1914, soon after the outbreak of World War 1.

He joined the French Army and was killed in action on 23 February 1916 at the Battle of Verdun which had started with a German attack two days before. The following citation was issued by his Divisional commander:

"Wattel, Paul, Sergeant, 17th Company, responsible for re-establishing the link with a nearby unit engaged in the combat, accomplished his mission under an intense bombardment and was killed as he returned on February 23, 1916." Source: Le Courrier Australien, 16 June 1916, p4.

He is commemorated on a War Memorial at his birthplace, Tourcoing, France. [JSB] 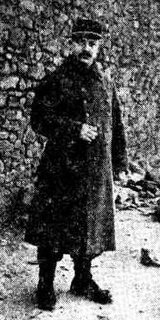