A letter in the service records dated 12 May 1921 states that Peisley's father is living at Military Road, Spit Junction, and that his sister Mrs Gibson also lives in Military Road. (His mother is listed as next of kin on the first page of his service records "c/o Mrs C.P. Gibson, 32 Wolseley Road, Mosman). Served in the Boer War (embarked July 1901) and did not return to Australia until 1911. Had a wife but no children, and was estranged from his wife.

Peisley's Red Cross Wounded & Missing file states he was hit by a shell during an attack on Proyart and died of his wounds at a 3rd Australian Field Ambulance advanced dressing station. He was Company Sergeant-Major to A Company, 2nd Battalion.

Peisley got his knock near Proyart. We were advancing at the time through a heavy barrage of 5.9s. which Jerry put up on us, and Peisley had his right leg blown off at the thigh. I helped to pick him up, put him on the stretcher. When we got him on the stretcher he said "they have got me at last, remember me to the boys." I was knocked over [by] the same shell but fortunately was not hurt. This happened about 7 in the morning and we had hopped over about 5. Peisley was taken back to the F.A. at Morcourt and died there that night or early in the morning. It was wonderful that he lived so long but he was a thin, wiry chap with great vitality. He was my Sgt/Major. He was properly buried in Morcourt Cemetery and our Pioneers erected a cross over his grave. He was about 5ft. 11. and an original Anzac, and was known as "Snow". 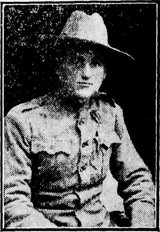