Served and wounded at Gallipoli.  Returned to Australia in May 1916 to complete medical course at Sydney University. 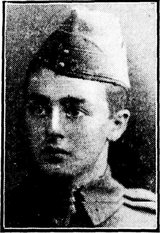