General William Birdwood, commander of I Anzac Corps, sent a letter of congratulations for his gallantry at Polygon Wood as follows:

I write to congratulate you most heartily upon the award to you of the Military Cross in recognition of your good work during the operation at Polygon Wood on September 26 (1917). I know that after marking and forming a track to the objectives gained, you noticed that heavy machine gun fire from the right was checking some of the attacking troops, whose officers had become casualties. You immediately took command of the men among whom you distributed sappers, and supervised the consolidation of a line covering the gap. Owing to the heavy shelling, and the resultant dust and smoke, the maintenance of the direction was extremely difficult, and you displayed great gallantry in going up and down the line encouraging the men to dig in, and by taking compass bearings, ensured the accuracy of your position, which you explained to the men. Thank you very much for your fine work, and with good wishes for the future.

The citation in the London Gazette for the award of the Military Cross reads:

For conspicuous gallantry and devotion to duty. He led forward parties and marked and formed a track to the captured position under heavy fire. Later, when he found that the neighbouring infantry were without officers, he immediately took command and consolidated the position with great skill under very difficult conditions. He set a magnificent example to all ranks by his gallantry and contempt of danger.” 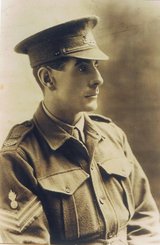