Married Marie Ghislaine 'Germaine' Lamendin, daughter of Jules Ghislain Lamendin and Jeanne Coppin, of Leval-Chaudeville, Beaumont, Belgium, at the town hall of that village, 14 May 1919.

Settled in Belgium after the First World War. Had two sons (Ghislain Price 1926-2009 and ?). Wife died in 1930. Price and his sons fought with the resistance during the Second World War before Leslie escaped to England through France and Spain. 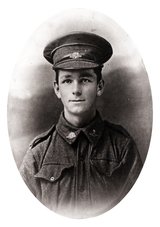